Kinesiographic analysis of lateral excursive movement on the horizontal plane: the retrusive component 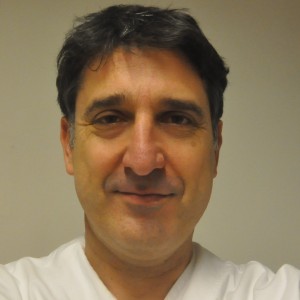 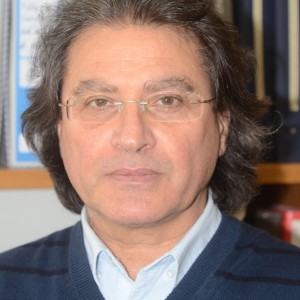 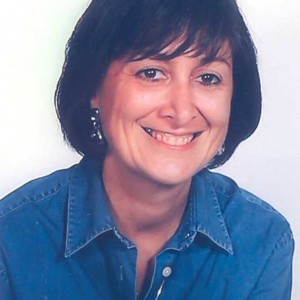 The temporomandibular joint (TMJ) has a functionally complex articulation that during phylogeny underwent an adaptation also linked to posture change after the acquisition of upright posture and subsequent reduction of the postglenoid process.This articulation supports numerous functions of the stomatognathic apparatus, and the part physiologically designed to withstand greater loads associated with mastication is essentially the frontal one; the rear portion of the TMJ is unfit to absorb retrusive forces owing to the poor support of the thin bone component and the histological characteristics of the tissue component. The purpose of this article was to analyze the angles of lateral tracings both on the frontal plane and on the horizontal one through kinesiographic analysis (functional masticatory angle of Planas and functional horizontal masticatory angle) in seeking to observe their mutual relations with respect to those planes.

The phylogenetic evolution has produced a number of postural changes related to the attainment of the upright position, and the TMJ, in its relationship to the tympanic cavity, has undergone a transformation.

In fact, while both in anthropomorphic and in nonanthropomorphic monkeys, the rear portion of the TMJ is bounded posteriorly by the postglenoid process1Lockwood CA, Lynch JM, Kimbel WH. Quantifying temporal bone morphology of great apes and humans: an approach using geometric morphometrics.
→ J Anat. 2002 Dec;201(6):447–64.—a bony protuberance of marked thickness that delimits and separates the mandibular fossa from the tympanic cavity2Newell L, Wood B. Cranial base evolution within the hominin clade.
→ J Anat. 2008 Apr;212(4):455–68.—in Homo sapiens, this process has had a progressive thinning, ending in a factual disappearance. Therefore, in modern man, the rear wall of the mandibular fossa forms the front wall of the tympanic cavity. It is a thin layer, crossed by a canal (named Huguier’s or Civinini’s canal, after the researcher who first described it) that connects the two structures.3Buffoli B, Galli M, Papini A, Ferrari M, Belotti F, Labanca M, Tschabitscher M, Rodella LF. Morphometric analysis of Huguier’s canal by cone beam CT.
→ Italian J Anat Embriology. 2013;118(2 Suppl):36.4Şencimen M, Yalçin N, Doğan, Varol A, Okçu KM, Ozan, Aydintuğ YS. Anatomical and functional aspects of ligamentsbetween the malleus and the temporomandibular joint.
→ Int J Oral Maxillofac Surg. 2008 Oct;37(10):943–7. Epub 2008 Sep 2. The soft-tissue that makes up the retrodiscal portion of the TMJ is histologically unfit to withstand compressive forces, as the retrodiscal portion of the TMJ, richly vascularized and innervated,5Benigno MI, Azeredo RA, Lemos JL, König B Jr, Liberti EA. The structure of the bilaminar zone in the human temporomandibular joint: a light and scanning electron microscopy study in young and elderly subjects.
→iJ Oral Rehabil. 2001 Feb;28(2):113–9. essentially acts as a hydrodynamic support. It is worth considering that some of the connective fibers of the retrodiscal tissue penetrate the Huguier’s canal,6Sato A, Asaumi R, Imura K, Kawai T, Yosue T. Classifications of tunnel-like structure of human petrotympanic fissure by cone beam CT.
→ Surg Radiol Anat. 2008 Jun;30(4):323–6. Epub 2008 Feb 21. forming the discomallear ligament and reaching the tympanic cavity, attaching to the malleus head and neck. In summary, these characteristics make the posterior region of the TMJ unsuitable for bearing the functional loads of mastication and swallowing, since, under optimum conditions, the condyle should never cause excessive compression of retrodiscal tissue. In fact, prolonged and constant compressive stress, linked for instance to dysfunctional situations, determines stresses that tend over time to result in reparative fibrotic processes,7Scapino RP. Histopathology associated with malposition of the human temporomandibular joint disc.
→ Oral Surg Oral Med Oral Pathol. 1983 Apr;55(4):382–97.8Mazza D, Stasolla A, Kharrub Z, Maccioni F, Marini M. MRI evaluation of morpho- structural alterations of the retrodiscal tissue in condylo-meniscal incoordination of the TMJ: usefulness of individualised T2-weighted TSE sequences.
→ Radiol Med. 2004 Mar;107(3):261–8. leading to structural changes9Westesson PL, Paesani D. MR imaging of the TMJ: decreased signal from the retrodiskal tissue.
→ Oral Surg Oral Med Oral Pathol. 1993 Nov;76(5):631–5.10Hall MB, Brown RW, Baughman RA. Histologic appearance of the bilaminar zone in internal derangement of the temporomandibular joint.
→ Oral Surg Oral Med Oral Pathol. 1984 Oct;58(4):375–81. responsible for a different biomechanical response of the tissue.

The study of mandibular movement on the horizontal plane is associated with the interincisal point movement. Gysi in his records11Gysi A. Handbuch der zahnheilkunde. Vol. 3.
→ Munich: Verlag von J.F. Bergmann; 1930. was the first to describe the Gothic arch: In classic gnathology the lateral tracings on the horizontal plane are described as an anterolateral shift. Symmetrical on both sides, the lateral tracings on the frontal plane are usually described as an anterolateral development. In patients with dysfunction, kinesiographs show as a norm a deformation of the Gothic arch: One of the two lateral tracings tends to lose the anterolateral direction to acquire a tendency to posteriorization (Fig. 1). Guichet has described a 60° conic volume in which the working condyle can shift during the lateral excursion.12Molina M. Concetti fondamentali di gnatologia moderna. 2nd ed.
→ Milan: ILIC; 2002. 513 p. The interincisal point used in the recording of the Gothic arch can be placed geometrically in relation to the condyles.13Mongini F. A combined method to determine the therapeutic position for occlusal rehabilitation.
→ J Prosthet Dent. 1982 Apr;47(4):434–9.14Mongini F. Condyle position and occlusal position abnormalities.
→ In: Solberg WK, editor. Abnormal jaw mechanics: diagnosis and treatment. Chicago: Quintessence; 1984. Mongini has described in the position of maximum intercuspation the relationships between the interincisal point and the position of the condyles.15Mongini F. L’apparato stomatognatico. Funzione, disfunzione e riabilitazione. Ed. Internazionali.
→ Milan: Scienza e tecnica dentistica; 1989.

Through the aid of a kinesiograph during lateral excursion, the tracing of the interincisal point on the horizontal plane can be placed in relation to the movement of the working condyle: during lateral excursion, the balancing condyle always shifts in the anteromedial direction, while the working condyle can move both in the anterolateral direction and in the posterolateral one. The interincisal point will have the same tendency of the working condyle movement (Fig. 2). The Gothic arch, which highlights the excursive interincisal movements of the point on the horizontal plane, can be considered a horizontal section of a volume defined by Posselt with the trajectories of maximum movements of opening, laterality and protrusion.16Posselt U. The physiology of occlusion and rehabilitation. 2nd ed.
→ 1968. 17. Planas P. Rehabilitación neuro-oclusal (RNO). 2a ed. The volume of Posselt can be defined as a 3-D perimeter within which the jaw can achieve its functional movements. 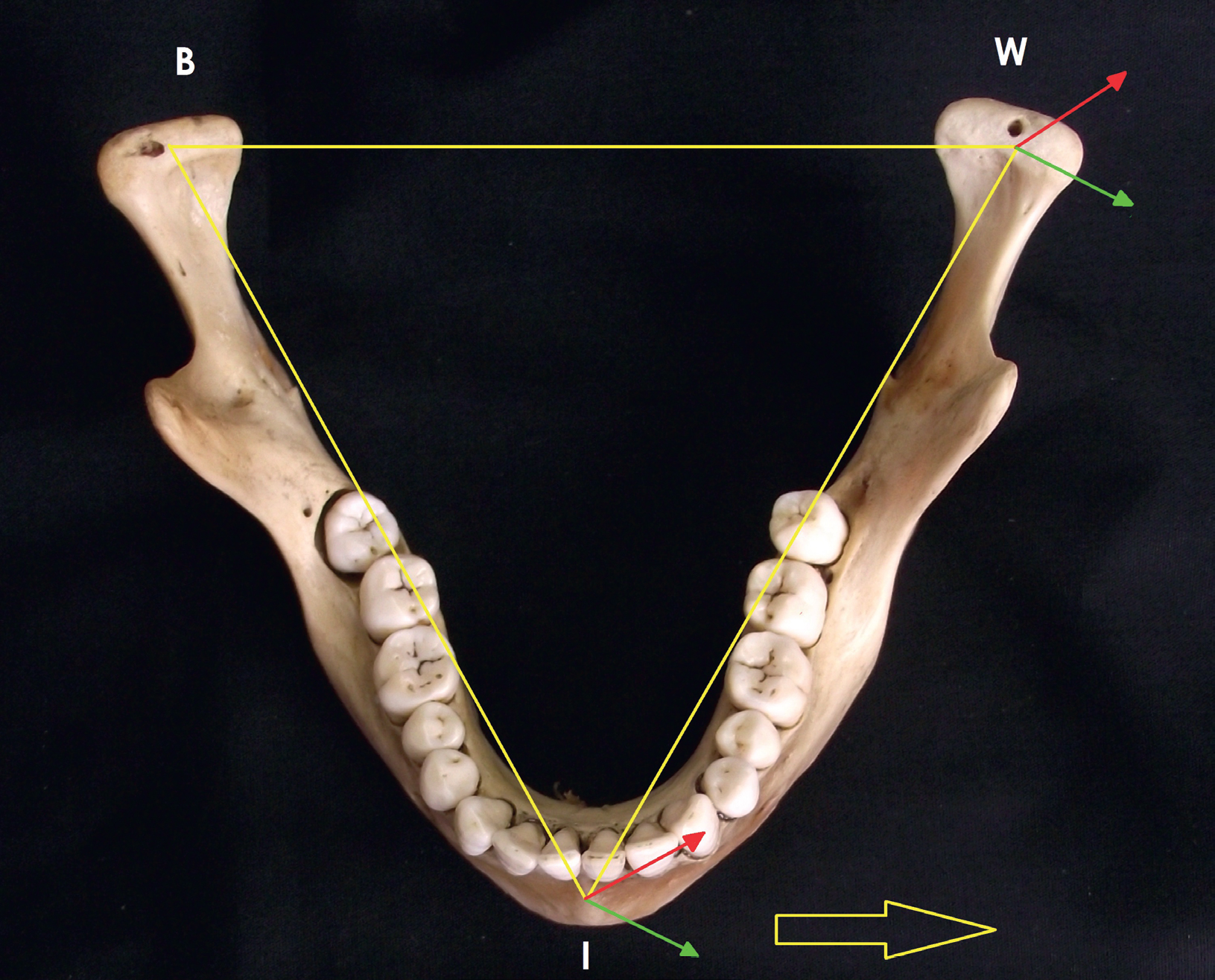 Fig. 2
Relation between the interincisal point movement and the working condyle movement.

In patients with dysfunction, an asymmetrical Gothic arch, altered and reduced in its developments, is practically the norm and must be interpreted as a planar representation of the deformation of the entire Posselt volume (Fig. 3). Alternating unilateral mastication allows better control of the food bolus and of the forces that develop during mastication; from a biomechanical point of view, it tends to symmetrically allocate the distribution of load on the dental, periodontal, bone, joint and muscle structures. This alternation of the masticatory cycles is permitted by the symmetry of the functional masticatory angles of Planas (AFMP, angles fonctionnels masticatoires de Planas). The AFMPs are the angles that are created on the frontal plane between the lateral distances and the horizontal plane, while the functional horizontal masticatory angles (AFMO) are those that are created on the horizontal plane between the lateral distances and the frontal plane (Fig. 4). In the presence of a retrusive AFMO, there will be a deformation of the Gothic arch structure (Fig. 1). 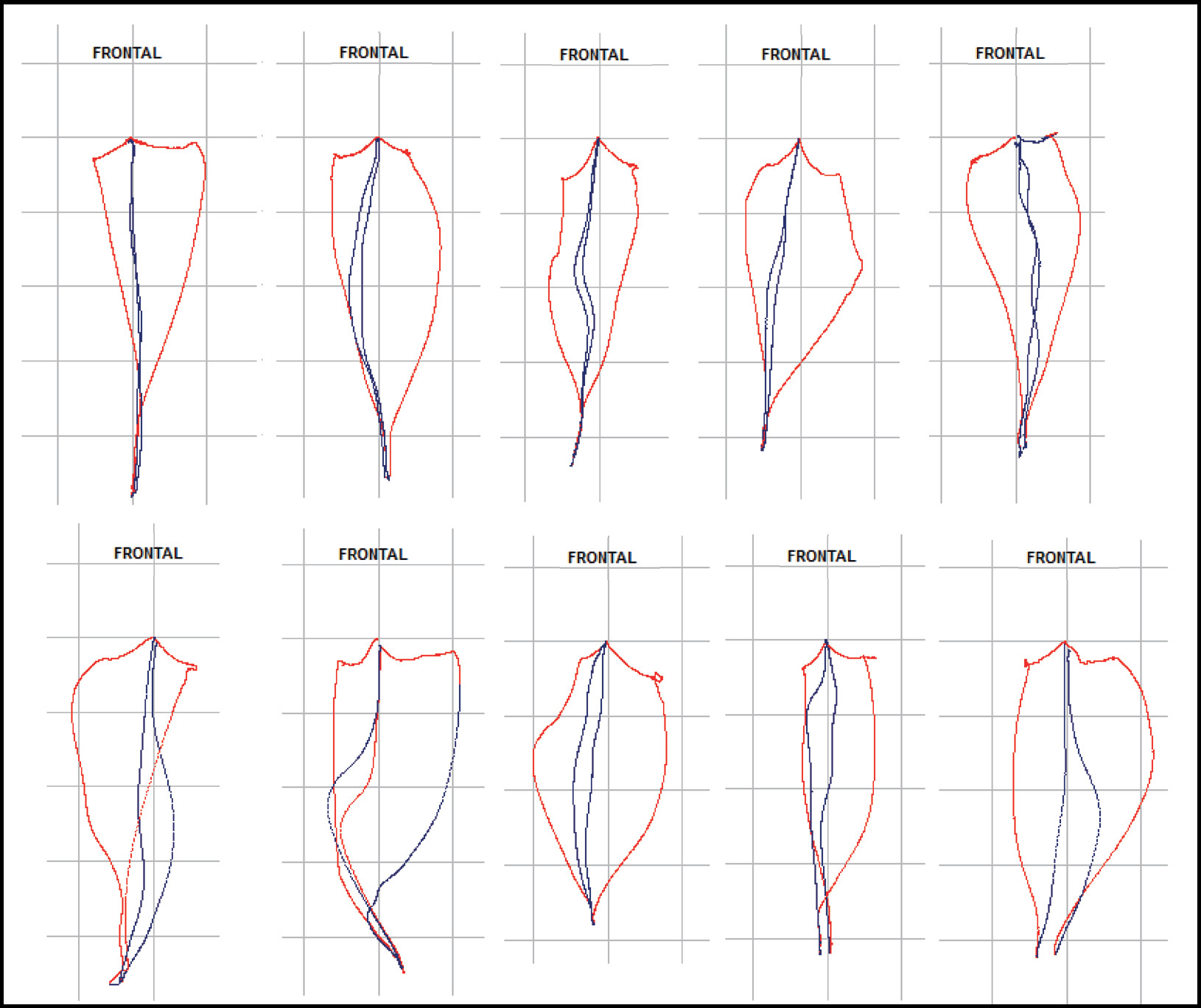 The study was performed on 115 patients who presented with asymmetrical lateral excursion The sample was made up of 32 males and 85 females aged between 17 and 84. The instrument used for this study was a Bioket kinesiograph (Bioket, S.Benedetto del Tronto, Italy). Eligible subjects were placed in a sitting position, not on the dental chair, feet with full plantar support on the floor. The kinesiographic mask was positioned with reference to the horizontal plane, and the magnet was placed in an equidistant position with respect to the two detectors of the kinesiograph. 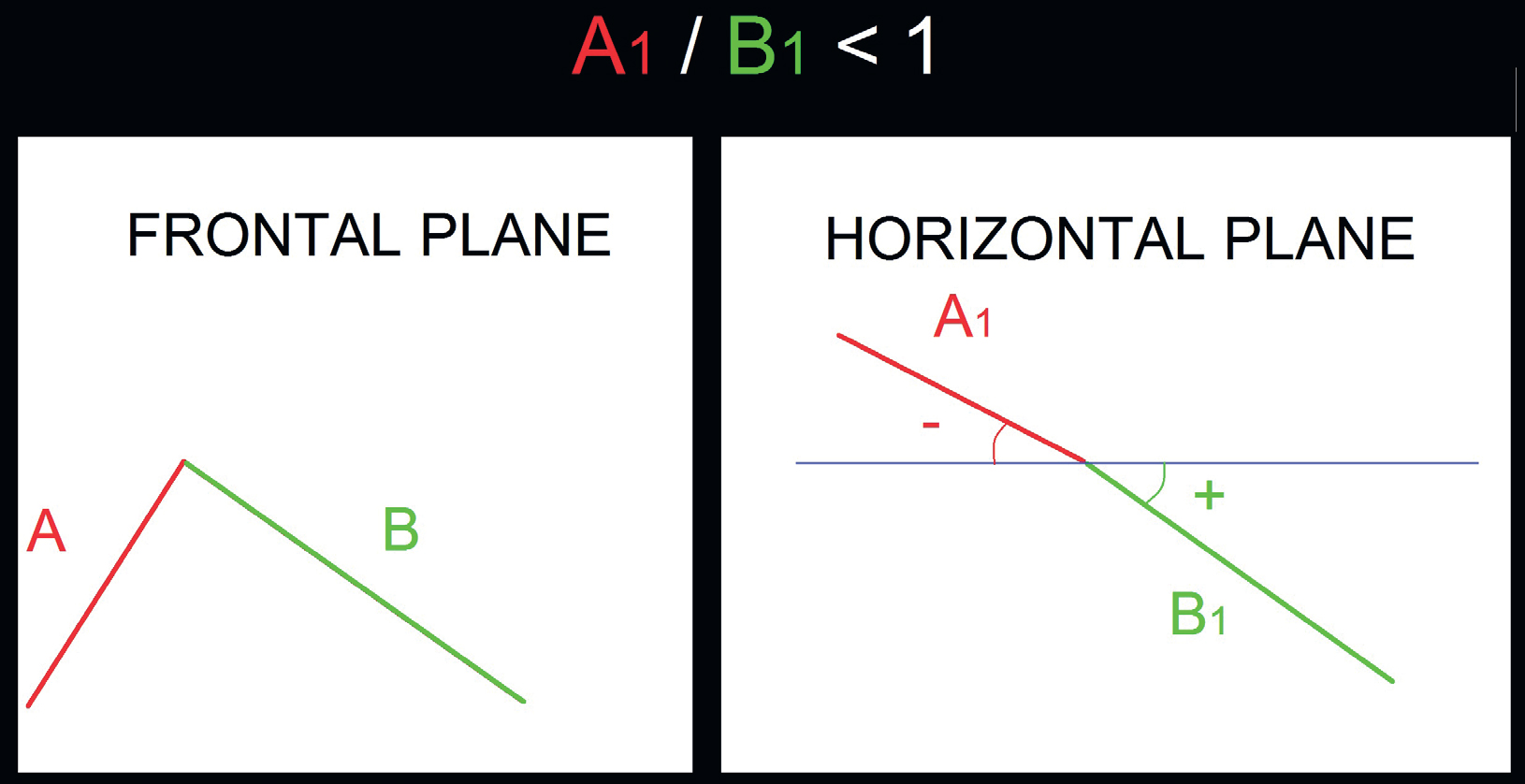 Planas in defining the AFMP emphasized the pattern of unilateral mastication.17Posselt U. The physiology of occlusion and rehabilitation. 2nd ed.
→ 1968. 17. Planas P. Rehabilitación neuro-oclusal (RNO). 2a ed. Predominantly unilateral mastication usually occurs when there is a side of the mouth in which the function can be performed with more ease and efficiency compared with the contralateral side (Fig. 6). Predominantly unilateral mastication tends to develop from the side with less steep laterality or with a smaller AFMP. The study of laterality with a Bioket kinesiograph has permitted to highlight also on the horizontal plane the asymmetry defined by Planas on the frontal plane: On the horizontal plane, the side with the less steep AFMP (usually the one with an easy lateral excursion and functionally prevailing masticatory side) tends to correspond to the side with the tracing that is expressed in anteriority (Fig. 7) and vice versa. This is referred to as the consistency of the tracings of laterality between the front and the horizontal planes. 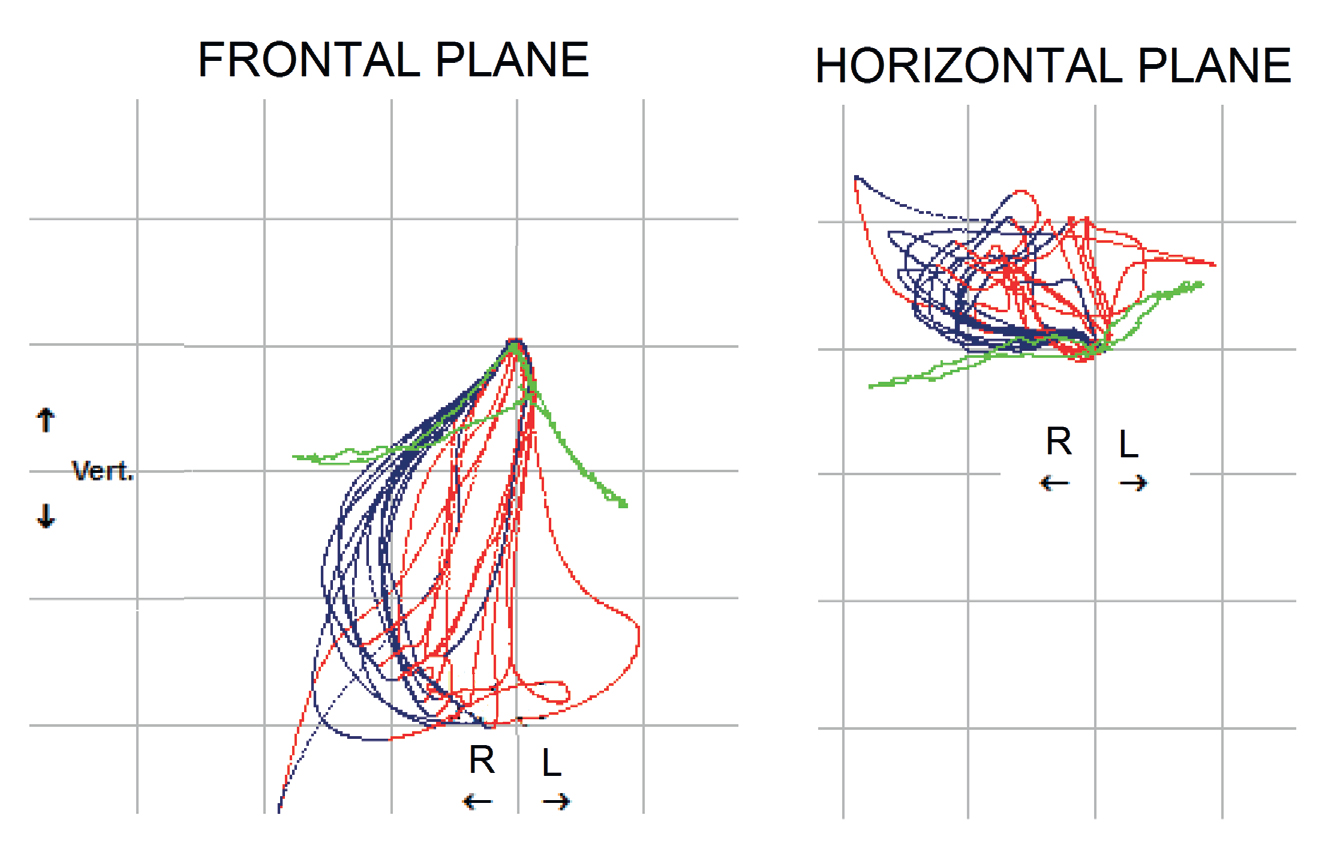 An AFMO tending to posteriorization is an index of laterality with a retrusive component: The entry stage of the masticatory cycle (during which the masticatory forces reach their maximum intensity) tends to take place with an unfavorable condyle–fossa relationship. A lateral retrusion tends to create a compression of the retrodiscal tissue, hindering proper mastication and encouraging mastication on the contralateral side (Fig. 8). 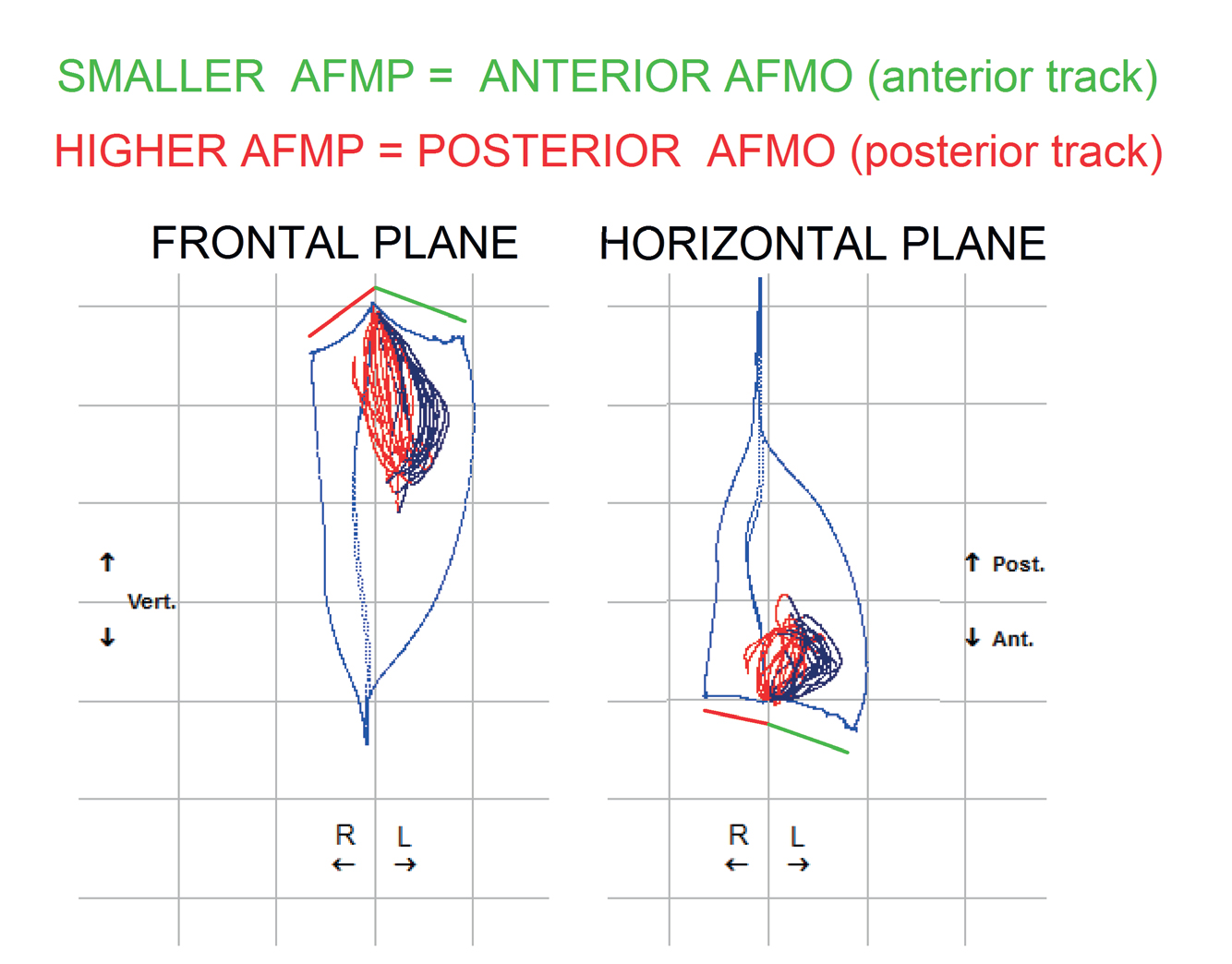 Fig. 9
Decreasing the AFMP on the frontal plane tended to reduce the retrusion of the corresponding AFMO on the horizontal plane, correcting and regularizing the Posselt volume.

Therefore, analysis of lateral excursion movements with evaluation of the prevailing masticatory side cannot exclude analysis of lateral excursion on the horizontal plane. In kinesiographic tracings of patients with dysfunction, the asymmetries of the AFMP and AFMO (and therefore of the Gothic arch and the Posselt volume) are largely the norm: Steeper laterality on the frontal plane will tend to have a retrusive tracing (absolute or relative to the contralateral side) on the horizontal plane. 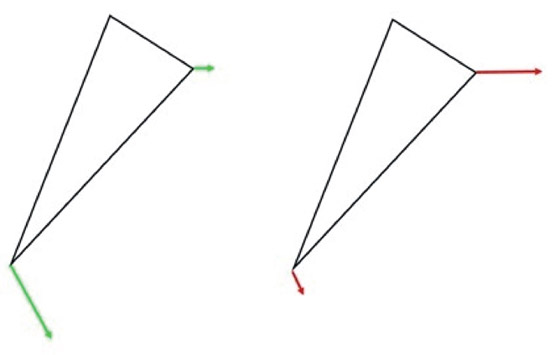 A posterior AFMO (absolute or relative to the contralateral side) indicates a difficult, countered laterality and will tend to highlight the side with problematic masticatory function. Reducing the steeper inclination of the AFMP will tend to reduce the retrusion of the corresponding AFMO, regularizing the Gothic arch and the Posselt volume, and this will promote the restoration of alternating unilateral mastication.

Acting properly on the occlusal surfaces, we are able to influence the whole of the mandibular dynamics by changing not only the movements related to occlusal guides, but also the mandibular movements in full, both in the amount of maximum openness, in their transverse width and in their inclination. Premature contacts or interferences that induce retrusion of the lateral excursion on the horizontal plane with posteriorization of the entry phase of the masticatory cycle will tend to favor prevalent mastication on the contralateral side. With asymmetry correction of lateral excursion, we tend to decrease the condylar retrusion, expand and symmetrize the Gothic arch and the volume of Posselt, thus directing the masticatory function to a physiological alternating unilateral mastication.

The authors declare that they have no conflict of interest regarding the materials used in the present study.