The prevalence and quantitative analysis of the Epstein–Barr virus in healthy implants and implants affected by periimplantitis: A preliminary report 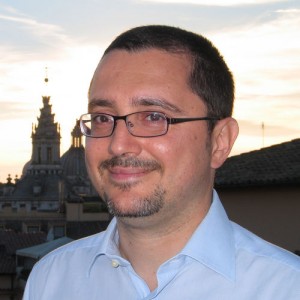 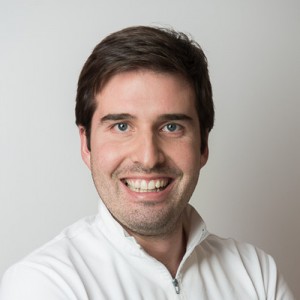 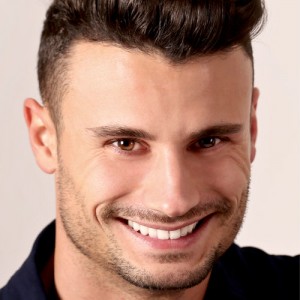 Viruses, in particular the Epstein–Barr virus (EBV), appear to play a role in the genesis and progression of human periodontitis and periimplantitis. The aim of the present study was to compare the presence of EBV in healthy periimplant sites or those affected by periimplantitis.

Besides in periodontitis, recent studies have shown a correlation between periimplant infection and the presence of EBV. Jankovic et al. found a high prevalence of Human cytomega – lovirus (HCMV) and EBV DNA in the subgingival plaque of periimplantitis sites, suggesting a possible active pathogenic role in periimplantitis.7Jankovic S, Aleksic Z, Dimitrijevic B, Lekovic V, Camargo P, Kenney B. Prevalence of human cytomegalovirus and Epstein-Barr virus in subgingival plaque at periimplantitis, mucositis and healthy sites. A pilot study. → Int J Oral Maxillofac Surg. 2011 Mar;40(3):271–6. They showed a higher prevalence of EBV and HCMV in periimplantitis sites compared with healthy periimplant sites. In a split-mouth study, Verdugo et al. suggested that EBV may be a likely candidate in the etiopathogenesis of periimplant disease and that periimplantitis etio – pathogenesis could be orchestrated and fueled by a combination of EBV and Gram-negative anaerobic rods.8Verdugo F, Castillo A, Castillo F, Uribarri A. Epstein–Barr virus associated peri-implantitis: a splitmouth study. → Clin Oral Investig. 2015 Mar;19(2):535–43. Epub 2014 May 7. The aim of the present study is to compare the presence of EBV in periimplantitis-affected and healthy periimplant sites.

From January 2013 to December 2014, 50 consecutive subjects with implants affected by periimplantitis and 50 subjects with healthy implants attending for a routine check-up or spontaneous visits during the study period in three private clinics (Rome and Genoa, Italy, and Belgrade, Serbia) were enrolled in this clinical study.

The inclusion criteria were systemically healthy nonsmoker subjects treated with at least one implant that had been functioning for at least one year. Patients were periodontally healthy and had not taken any systemic antibiotics, antiinflammatory drugs or oral antimicrobial agents within the preceding six months.

All clinical examinations were performed by the same operators (LC, PP and MR) and sub – gingival plaque samples were collected with the GUIDOR Perio-Implant Diagnostic Kit (Sunstar Iberia, Barcelona, Spain). The sampling kit is intended for the collection and transport of samples containing periodontal and periimplant pathogens. Briefly, prior to subgingival plaque sampling, each tooth was isolated with cotton rolls. Absorbent paper points were inserted into the periodontal pockets. After 15s, these paper points were removed and placed into a 2 ml tube. The tubes containing the sample were sent to the Institut Clinident laboratory (France) in the provided mailing envelopes. The internal connections and external surfaces of the implants were evaluated.

Assays were carried out on the Rotor-Gene Q thermal cycling system with the following program: 50 °C for 2 min, 95 °C for 10 min, followed by 45 cycles of 15 s at 95 °C, and 60 s at 60 °C. Fluorescence signals (FAM, emission 520 nm; Yellow Dye, emission 548 nm) were measured every cycle at the end of the extension step. The resulting data were analyzed using Rotor-Gene Q Series Software (Qiagen, Hilden, Germany).

Normality of variables was assessed by graphical methods (mean of histograms) and confirmed by the Shapiro–Wilk normality test and the Levene test of homogeneity of variance. All characteristics were summarized using mean (standard deviation) median (range) or frequencies (percentages). 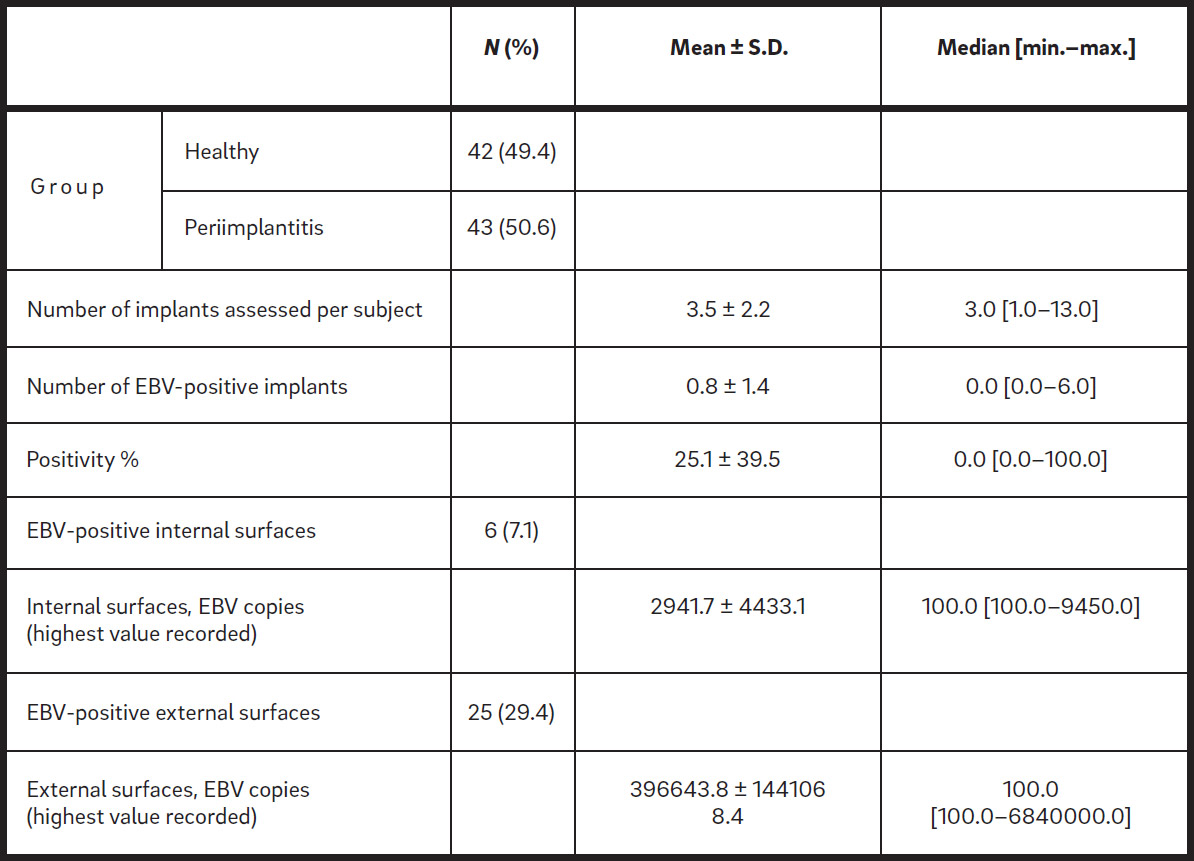 Table 1
Clinical characteristics of the sample. 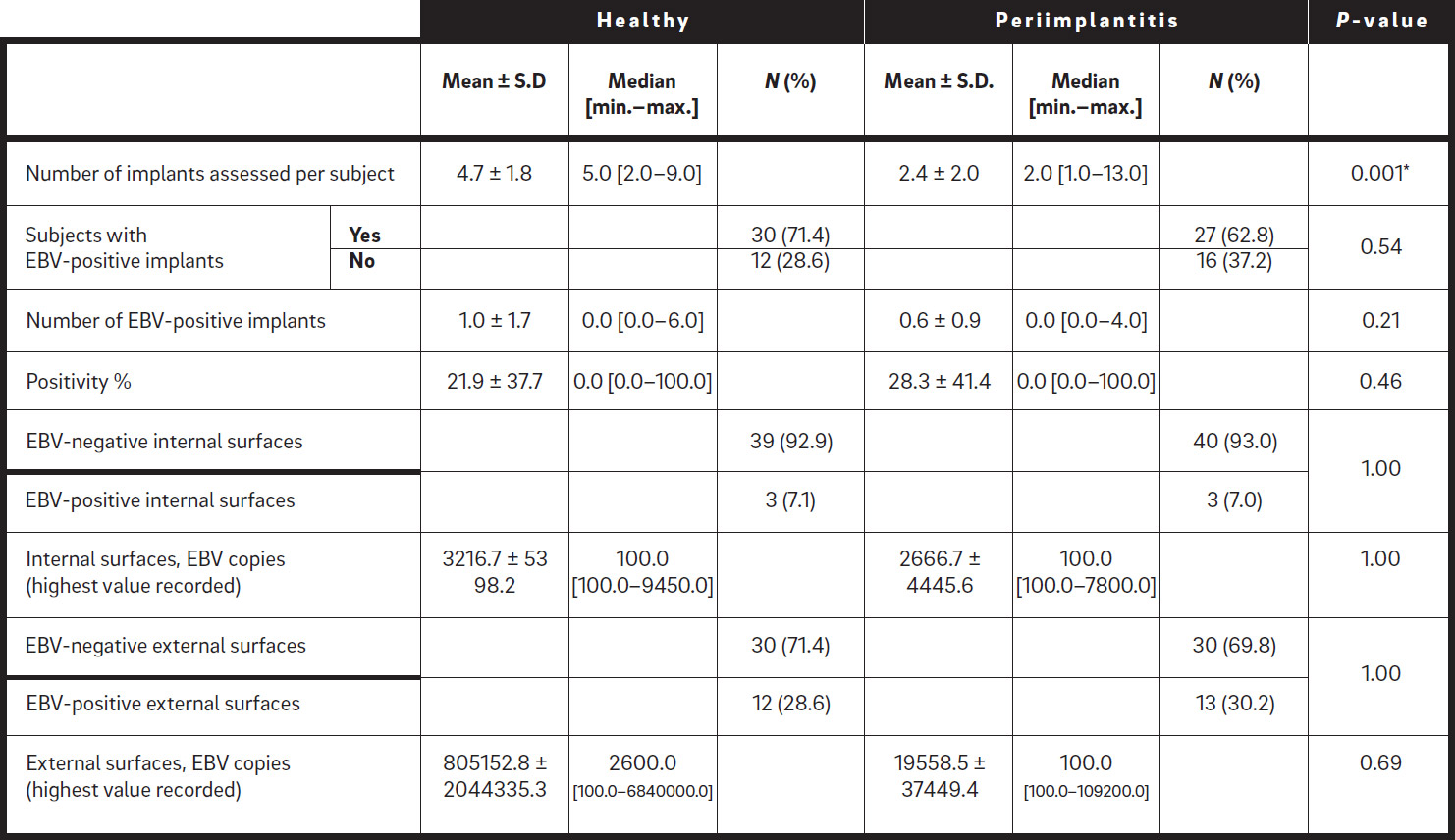 *A p-value of ≤ 0.05 was considered statistically significant.
Table 2
Differences between thetwo groups of patients. 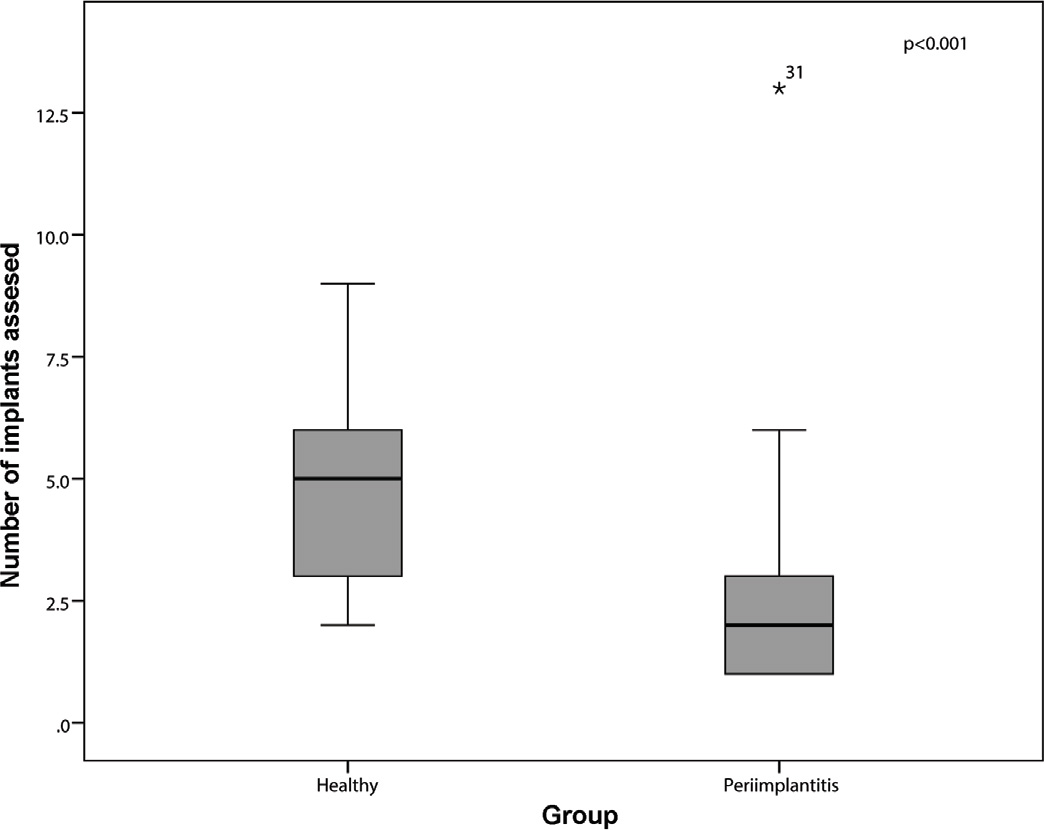 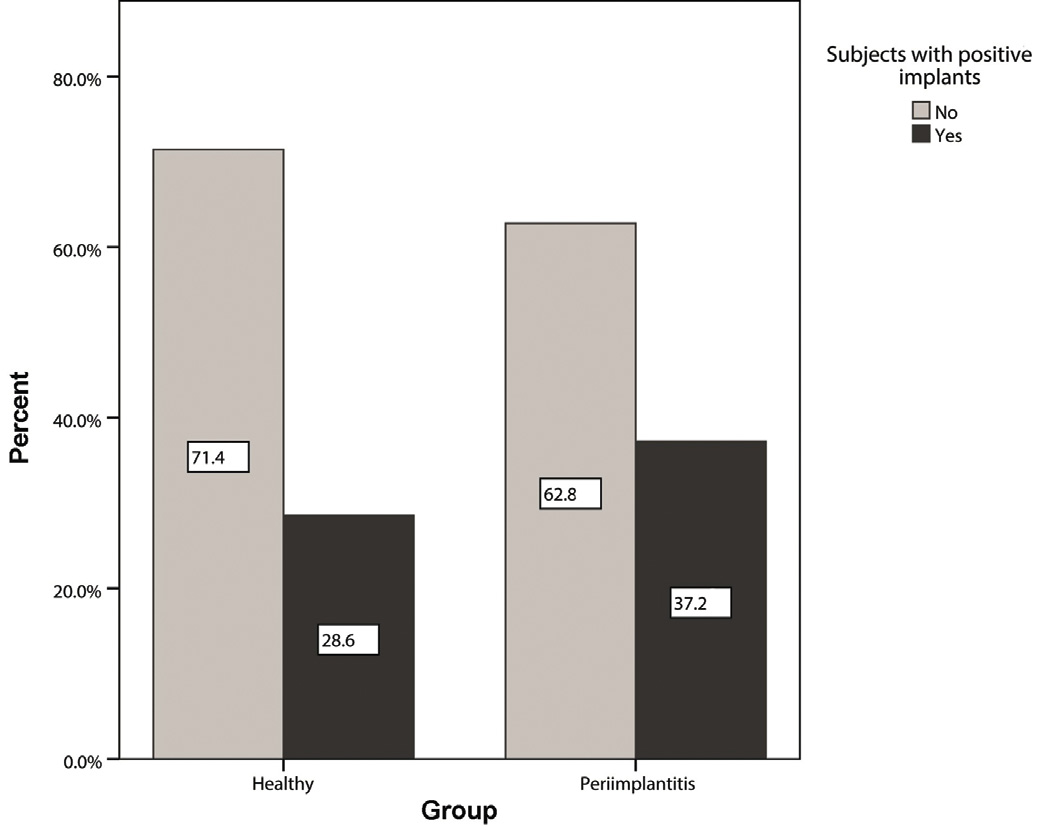 Fig. 1
Difference in the number of implants assessed between healthy patients and patients with periimplantitis.

Fig. 2
Subjects with EBV-positive implants in the two groups.

Independent sample t-tests or nonparametric Mann–Whitney U tests were performed to check for any statistically significant difference in each continuous variable between the two groups of patients (healthy vs. periimplantitis).

Chi-squared tests or Fisher exact tests were used to assess whether a statistically significant change in proportions occurred in categorical variables between the two groups of patients in the same population.

At the end of the study, the total population consisted of 83 subjects (44 females, 39 males; mean age: 59.5 ± 11.3 years). Twentyfour females and 19 males were reported in the group with periimplantitis, and 20 females and 20 males were reported in the healthy patients. Seven patients belonging to the periimplantitis group and ten to the healthy group refused to undergo the microbiological analysis and for this reason were excluded from the studied sample.

The study evaluated 103 dental implants affected by periimplantitis and 197 healthy implants (mean time of loading: 5.31 ± 2.6 years). Clinical characteristics are shown in Table 1. In Table 2, all of the differences between the two groups of patients are expressed.

A statistically significant difference (p< 0.001) between the two groups (Fig. 1) was observed in the total number of implants assessed per patient, with a higher number in the healthy subjects (4.7 ± 1.8) compared with patients with periimplantitis (2.4 ± 2.0). For the other evaluated variables, no statistically significant difference was detected (p > 0.05; Table 2).

EBV was present in 12 patients (Fig. 2) in the healthy group (28.6%) and in 16 patients in the periimplantitis group (37.2%). Of the implants affected by periimplantitis, 28.3% were positive for EBV, as were 21.9% of the healthy implants (Table 2). However, the differences between the two groups were not statistically significant. The highest and the median values recorded for EBV were higher among the healthy subjects in both the internal and the external implant sites. Figures 3 and 4 show the distribution of EBV in the internal and external implant sites with lower contamination by EBV in the internal implant connections with respect to the gingival sulci. 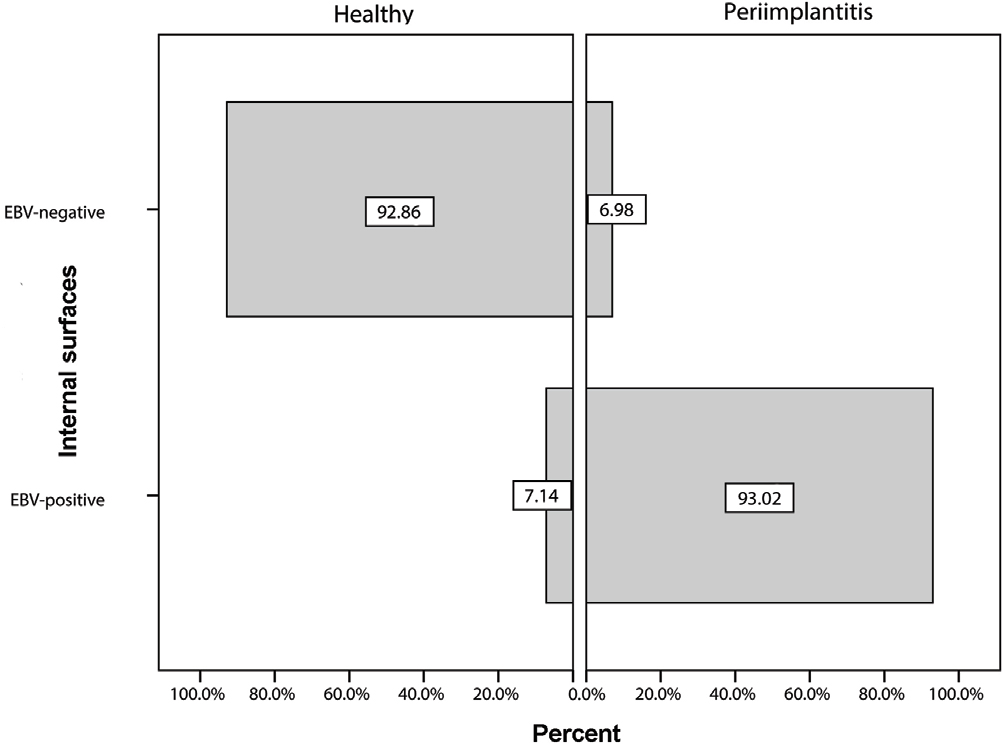 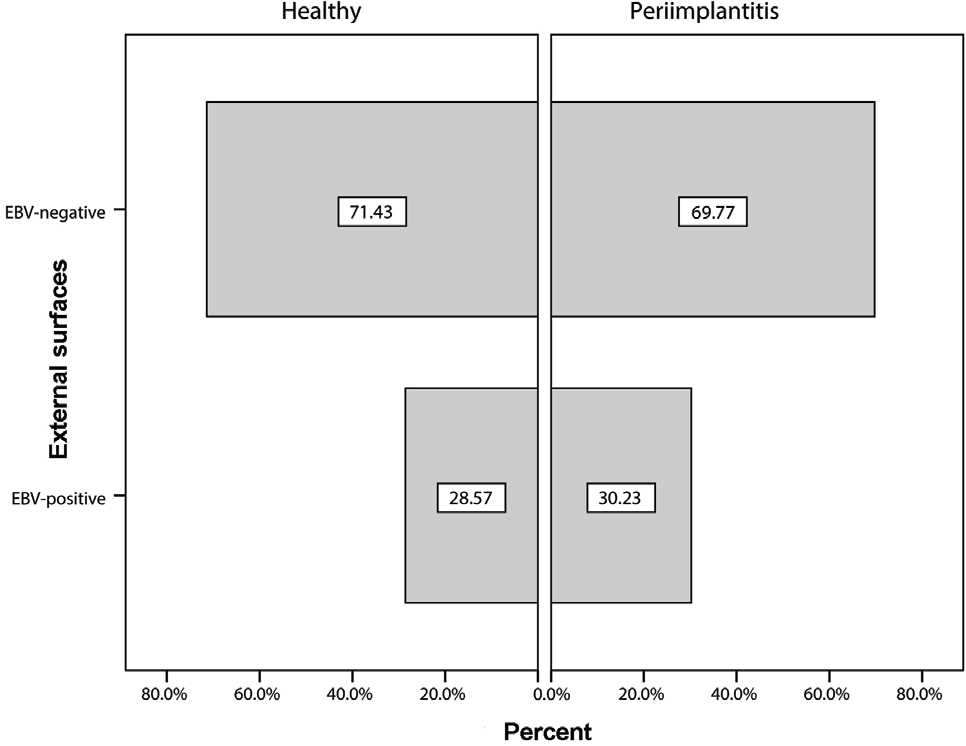 Fig. 3
Distribution of EBV in internal sites in both groups.

Fig. 4
Distribution of EBV in external sites in both groups.

Periimplantitis is one of the most controversial problems affecting the outcome of implant treatment. Different hypotheses have been proposed about its etiology and definition— even if the term “periimplantitis” appears to have been improperly used to describe any periimplant bone loss, irrespective of the complexity of the numerous factors that may contribute to loss of marginal bone around implants.12Pesce P, Menini M, Tealdo T, Bevilacqua M, Pera F, Pera P. Periimplantitis: a systematic review of recently published papers. → Int J Prosthodont. 2014 Jan-Feb;27(1):15–25.

Various authors have put forward the hypothesis that periimplantitis could be associated with EBV or HCMV. These viruses have been suggested to alter the local host immune response in combination with periodontopathic bacteria, with the potential to lead to periodontal and periimplant tissue destruction.13Jankovic S, Aleksic Z, Dimitrijevic B, Lekovic V, Camargo P, Kenney B. Prevalence of human cytomegalovirus and Epstein-Barr virus in subgingival plaque at periimplantitis, mucositis and healthy sites. A pilot study. → Int J Oral Maxillofac Surg. 2011 Mar;40(3):271–6.

In fact, it is well known that the great majority of the human population (more than 90%) are infected with EBV. This particular virus establishes specific communication with the host, changing the expression of its own genes in different cell types, depending on its differential status. During primary infection, EBV initially infects oral epithelial cells in the lytic form and subsequently infects B cells, where the virus assumes one of three different types of latency lifelong. Occasionally, the latent infection reactivates and changes into lytic infection. The differentiation of memory B cells with the EBV genome into plasma cells after antigen stimulation activates the lytic EBV infection. The reactivation most commonly occurs in tonsillar plasma cells, as well as in tonsillar B cells. This is one of the reasons that the saliva from immunocompromised but also immunocompetent persons often contains infectious EBV, with or without any signs of infection. EBV can change the immune response of the host with a specific influence on the immunopatho – geneses of infection. The cytokines secreted during EBV infection can influence local immunopathology.

The absence of significant differences between the groups could lead to the rejection of the hypothesis of the pathogenic key mechanism of viruses in the incidence of periimplantitis. However, this could be because the present study had a retrospective design. This limitation could jeopardize the detection of EBV, which is thought to activate immunological response only in the early stage of disease.16Niller HH, Szenthe K, Minarovits J. Epstein–Barr virus–host cell interactions: an epigenetic dialog? → Front Genet [Internet]. 2014 Oct 21 [cited 2015 Jun 22]; 5: 367. Available from: http://journal.frontiersin.org/article/10.3389/fgene.2014.00367/full. This could be indirectly confirmed by the fact that most parts of the sites in the periimplantitis group were under the limit of quantification. At the same time, interactions between EBV and herpesviruses could be supposed to have an effect on the host response.17Jankovic S, Aleksic Z, Dimitrijevic B, Lekovic V, Camargo P, Kenney B. Prevalence of human cytomegalovirus and Epstein-Barr virus in subgingival plaque at periimplantitis, mucositis and healthy sites. A pilot study. → Int J Oral Maxillofac Surg. 2011 Mar;40(3):271–6.

Various authors have proposed that micro – biological contamination of the internal implant connection indicates bacterial leakage along the implant–abutment interface, abutment– prosthesis interface, and restorative margins.18Canullo L, Penarrocha-Oltra D, Soldini C, Mazzocco F, Penarrocha M, Covani U. Microbiological assessment of the implant-abutment interface in different connections: cross-sectional study after 5 years of functional loading. → Clin Oral Implants Res. 2015 Apr;26(4):426–434. Epub 2014 Mar 26.19Cosyn J, Van Aelst L, Collaert B, Persson GR, De Bruyn H. The periimplant sulcus compared with internal implant and suprastructure components: a microbiological analysis. → Clin Implant Dent Relat Res. 2011 Dec;13(4):286–95. The results of the present study confirm viral leakage with the presence of EBV in the implant connection, even if with a lower detection frequency with respect to the peri – implant sulci. Three periimplantitis-affected implants and three healthy implants presented with EBV with no statistically significant differences between the two groups. That slightly less of the virus was found in patients with periimplantitis-affected sites compared with healthy sites may indicate that the intensive local immune response in the case of peri – implantitis reduces the amount of virus. However, in four sites, the virus was only found in the periimplant sulci. This could confirm the impressive turnover and interaction between bacteria and viruses, which could only be supposed in a retrospective study with one time point such as the present one. This particular interaction is likely mediated by cytokines produced during viral and bacterial infections. Tumor necrosis factor α, interleukin 1 and interleukin 6 have a great impact on the pathogenesis of peri implantitis. In this paper, we focused our attention on virus detection only and maybe this is the most important limitation of the study. For this reason, an observational prospective study focused also on bacteria could clarify the interactions between these microbiota and maybe the microbiological scenario of periimplantitis.

Within the limits of the present study, no statistically significant differences were found regarding the presence of EBV in healthy or periimplantitis- affected sites. This study failed to find a link between periimplantitis etiopathogenesis and viral infection.

The authors declare that they have no conflict of interests related to this study. The study was partially supported by Institute Clinident (Aix-en- Provence, France), which provided technical support, and Sweden & Martina (Padua, Italy), which provided diagnostic test kits.

The authors wish to acknowledge the skills and commitment of Dr. Audrenn Gautier in the supervision of the study.