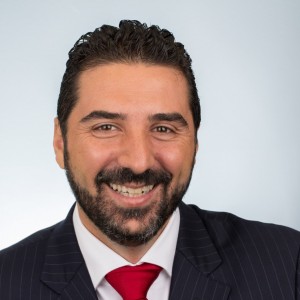 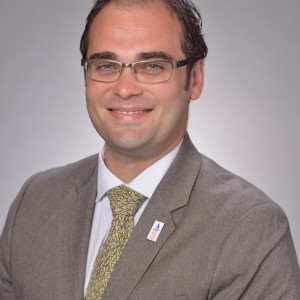 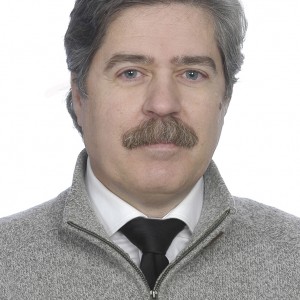 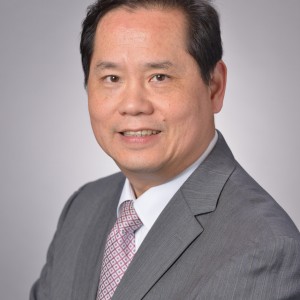 Platelet-rich plasma (PRP) gel is an autogenous blood-derived material that may be used as a regenerative agent of oral structures. The regenerative capacity of PRP is largely attributed to its composition, including many different growth factors. Thus far, no study has identified the molecular content of this gel. Therefore, it was the purpose of this study to assess the presence of different growth factors in PRP gel, using the Western blot technique.

Tissue integrity and blood vessel repair are essential after destructive and reconstructive events, such as surgery, trauma and regenerative procedures. The seeking for and identification of reliable and safe techniques or therapeutic methods that would predictably enhance the regenerative capacity in damaged tissue has become a major focus of current research.

A large number of cells are involved in wound healing, including platelets, which play a crucial role in controlling coagulation and releasing growth factors and cytokines related to tissue regeneration. Platelet-derived products isolated from the patient’s own blood have been extensively studied and tested because platelets are considered a source of cytokines and growth factors, which amplify wound healing and tissue repair.1De Pascale MR, Sommese L, Casamassimi A, Napoli C. Platelet derivatives in regenerative medicine: an update. → Transfus Med Rev. 2015 Jan;29(1):52–61.

Venous blood was obtained from 20 healthy volunteers (16 males and four females; mean age of 27.4), who gave their informed consent and met the following inclusion criteria after a complete medical history recording and examination: no medication taken in the last two weeks, no dental or intra-oral surgical treatment within the last month, and no vaccine received and no infection history within the last three months. Briefly, 20 cm3 of blood was drawn per patient and 5 cm3 placed into each of four Vacutainer tubes (Becton Dickinson, Oxford, U.K.), which contained 0.1 cm3 of 3.8% (w/v) sodium citrate. In order to minimize platelet activation during blood collection, a 19-gauge butterfly needle with a light tourniquet was used and the first 2 mL of blood was discarded. For the preparation of the PRP, a modification of the original procedure proposed by Anitua in 1999 was followed.25Anitua E. Plasma rich in growth factors: preliminary results of use in the preparation of future sites for implants. → Int J Oral Maxillofac Implants. 1999 Jul-Aug;14(4):529–35. Immediately after collection, the tubes were placed in a centrifuge machine to spin at 1,500 rpm for 7 min in order to separate the blood fractions. In order to produce PRP, 500 mL from the volume of plasma situated just over the top of the red fraction was collected from every sample. To each 500 mL of plasma, 250 mL of calcium chloride was added. Finally, the tubes were placed in a 37 ºC warm water bath for 20 min to accelerate the formation of a PRP gel. The remaining contents of the tubes was discarded.

Gels for electrophoresis (12% SDS-PAGE) were initially prepared for each experiment. Final samples consisting of a volume of 15 mL of PRP clot, previously diluted in a sample buffer (at a proportion of 1 mg/mL), were properly identified and placed on each well of the electrophoresis gels. The proteins were electrophoretically run at a rate of 60 V and 45 mA for 2 h, using the Power- Pac HC electrophoresis kit (Bio-Rad, Laboratories, Hercules, Calif., U.S.). Transference of the proteins located in the running gel was performed using a Trans-Blot SD device (Bio-Rad), at 25 V/60 mA for 50 min. Once the transference to nitrocellulose membranes, designed for protein transference, had been completed, specimens were submerged in 20 mL of blocking suspension (5 mg of fat-free powder milk diluted in 100 mL of 1 × TBS) for 60 min, at room temperature. After that, the membranes were incubated with the mentioned specific monoclonal antibodies for different growth factors in agitation, for 24 h at 4 °C. Three 5 min washes using a washing solution (0.5 mL of 0.1% TWEEN 20 in 500 mL of 1 × TBS) were performed prior to the incubation of the membranes with the secondary antibodies, for 2 h at room temperature. Finally, the membranes received three 5 min washes (0.5 mL of 0.1% TWEEN 20 in 500 mL of 1 × TBS), and they were developed and scanned. Bands for each sample were assessed and assigned to three levels of intensity: band not visible (–); band visible but not solid (+/–); and solid positive band (+).

In this qualitative analysis, all growth factors under study (VEGF, PDGF-A, TGF-β1, bFGF, IGF- 1 and EGF) were present in all of the patients (Table 1). The bands observed as positive after developing the membrane were located at the presumed molecular weight for each of the factors: VEGF at 45 kDa, TGF-β1 at 25 kDa, bFGF at 17 kDa, PDGF-A at 15 kDa, IGF-1 at 7.6 kDa and EGF at 6.4 kDa (Fig. 1). 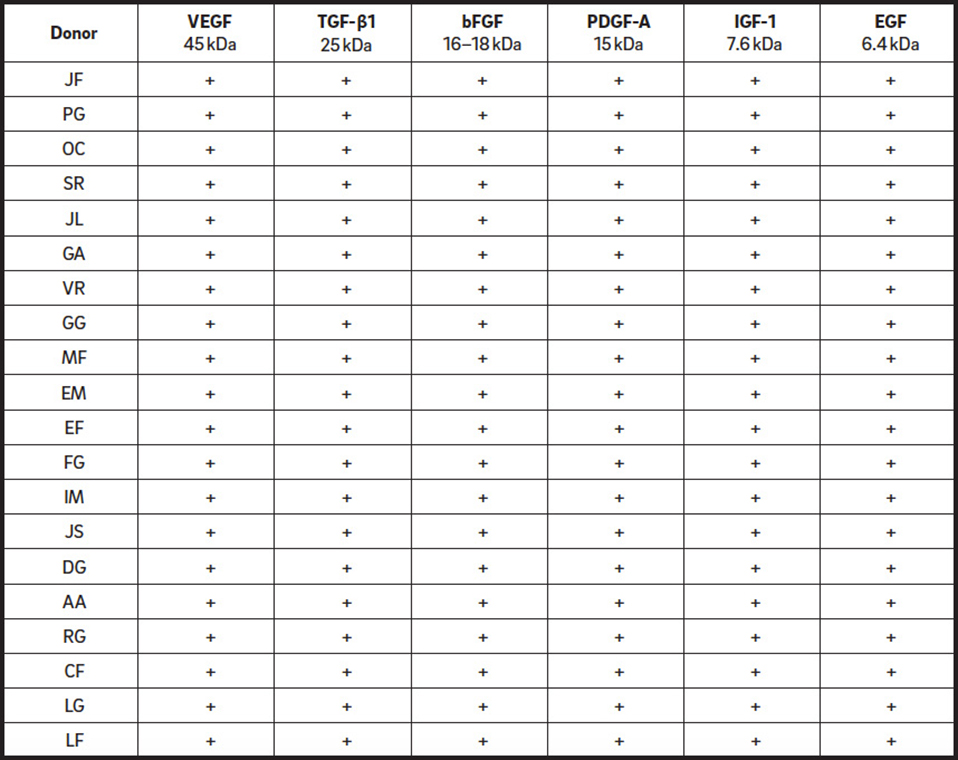 Despite the contribution of our findings to the understanding of PRP biology, they also raise more questions that need to be addressed. The identification of these growth factors in PRP gel only suggests their presence in the clot, without providing evidence supporting its biological benefit after its clinical usage, especially for regenerative approaches. Growth factors are proteins that, once released from the producer cell, exert a very localized action at specific ratios,57Vilček J. The cytokines: an overview. In: Thomson AW, Lotze MT, editors. → The cytokine handbook. Vol. 1. Avon (MA): Academic Press; 2003. p. 3–18. owing to their short life span. They are labile molecules highly susceptible to denaturalization mediated by proteases present in the wound site and to phagocytosis and might even become solubilized in the carrier.58Giannobile WV. Periodontal tissue engineering by growth factors. → Bone. 1996 Jul;19(1 Suppl):S23–37. These undesirable events usually lead to the inactivation or annulment of the biological properties of these mediators. For instance, PDGF cannot be detected in circulating blood in normal conditions, and when it is intravenously injected, its life span is around 2 min.59Nimni ME. Polypeptide growth factors: targeted delivery systems. → Biomaterials. 1997 Sep;18(18):1201–25. This lack of long-term activity associated with the short half-life of this platelet growth factor may require repeated applications over time to maintain their therapeutic effect.

Both the vehicle and concentration (dose) of biological mediators, such as platelet growth factors, may be critical factors to consider when seeking to achieve controlled modulation of cellular events in the desired time interval.60Hokugo A, Ozeki M, Kawakami O, Sugimoto K, Mushimoto K, Morita S, Tabata Y. Augmented bone regeneration activity of platelet-rich plasma by biodegradable gelatin hydrogel. → Tissue Eng. 2005 Jul-Aug;11(7-8):1224–33. However, it has to be taken into consideration that there is no currently available information about the optimal dosages of PRP needed to achieve the highest effectiveness.61De Pascale MR, Sommese L, Casamassimi A, Napoli C. Platelet derivatives in regenerative medicine: an update. → Transfus Med Rev. 2015 Jan;29(1):52–61.

It is also important to note that the technique used in this study for the detection of growth factors, Western blotting, allows detection of the presence of a determined protein in a sample by highly specific binding of antibodies to epitopes of that polypeptide. However, it is not possible to ultimately determine whether the target protein is biologically active and therefore able to exert its effect when applied to a wound. This fact, along with the arguments discussed before, moves us to reason that the beneficial effects obtained after application of autologous PRP gel may not be mediated only by the action of growth factors.

Considering this data, it is logical to outline several questions and doubts regarding the variable amount of growth factors, presenting a true ability to interact with the environment, that may be released from the PRP gel sample that is clinically applied. Are those growth factors the exclusive or major mediators responsible for a change in the biological conditions that lead to an improvement in tissue regeneration? Does the fibrillar component of the clot have a role in modulating the biological response that permits a better clinical response? Or, is it a synergistic effect between the fibrillar scaffold and different molecular components of blood plasma, among which growth factors are present, that induces those beneficial effects?

Understanding the role of each component of PRP gel in wound-healing events and the optimal concentration of molecules with the capacity of modulating these processes remains one of the major challenges for researchers in this field of tissue engineering. In order to address those questions, further in vitro and in vivo studies seeking to determine the physical interaction of PRP elements with cell types present in the craniofacial surgical field and its impact on cell proliferation and differentiation are needed.

The authors do not have any financial interests, either directly or indirectly, in the products listed in the study.