The aim of this study was to evaluate the clinical behavior of 2 implants of different macrodesigns placed in low-density bone at the moment of insertion and during bone healing.

In this split-mouth prospective randomized controlled clinical study, 60 Avinent dental implants (Avinent Implant System) were placed in the posterior maxillae of 30 patients. Each patient received 1 tapered implant with a wide thread (OCEAN) and 1 cylindrical implant with a narrow thread (CORAL). Primary stability was evaluated at baseline by measuring the insertion torque applied and registering the implant stability quotient (ISQ). Periimplant crestal bone loss was evaluated from intraoral radiographs taken at 1 and 4 months after implant placement. Lastly, ISQ was registered after 4 months.

Although both implant macrodesigns can be placed in low-density bone, tapered implants with a wide thread appear to produce better results in terms of insertion torque, ISQ and crestal bone loss 4 months after placement.

Thus, the aim of this split-mouth prospective randomized controlled study was to evaluate the clinical behavior of 2 implants of different macrodesigns at the moment of insertion in the low-density bone of the posterior upper jaw and during bone healing.

Recruitment and patient characteristics
The study protocol was approved by the University of Murcia’s ethics committee (Spain) (1933/2018) and was carried out between June 2018 and December 2018 at the university’s dental clinic. Subjects were treated according to guidelines established by the Declaration of Helsiki for medical research involving human subjects. All the subjects provided their informed consent to participate. The entire protocol (clinical, surgical and radiographic) was carried out by a single clinician. 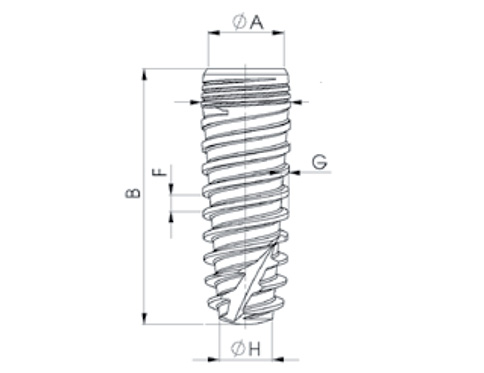 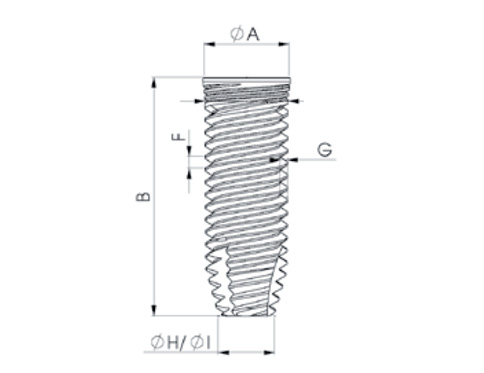 The inclusion criteria were as follows: aged over 18 years; total edentulism in the maxilla necessitating bilateral implant insertion in the posterior third in type III bone within a range of 350–830 Hounsfield units (HU), according to Norton and Gamble’s classification;22Norton MR, Gamble C. Bone classification: an objective scale of bone density using the computerized tomography scan. → Clin Oral Implants Res. 2001 Feb;12(1):79–84. absence of medical contraindications to oral surgical procedures (ASA I/II); and willingness to provide informed consent to take part. The exclusion criteria were as follows: presence of a disease or condition or use of medication that could compromise healing or osseointegration (diabetes mellitus, severe osteoporosis or bisphosphonate administration); pregnancy or lactation; and radiotherapy of the head and neck during the previous 18 months; and refusal to provide informed consent to take part.

Thirty patients fulfilled the inclusion criteria and were invited to take part in the trial. Before surgery, the patients’ sociodemographic data were registered, as well as their status regarding smoking and alcohol consumption, and their complete medical histories.

Bone mineral density measurements
To measure bone mineral density (BMD) in the maxillary posterior third in cone beam computed tomography (CBCT) images, a 3D circular region of interest was determined in each and it was between 10 and 20 mm2 in area. BMD was calculated in HU. The CBCT images were taken using a Kodak CS 8100 CBCT unit (Kodak) with the following specifications: 18 × 21 cm field of view, 90 kVp, 10 mA, exposure time of 15 s, and spatial resolution of 10 lp/cm and 0.2 mm voxel size. This CBCT unit was calibrated every 6 months in accordance with the Spanish Royal Decree of Dec. 23, 1976/1999. Images were constructed with Carestream 3D imaging software (Carestream Health).

Dental implant surgery and randomization
All the surgical interventions were performed under local anesthesia (1:100,000 articaine) by a single clinician at the same drilling speed of 50 rpm with irrigation. Each patient received 2 Avinent dental implants (Avinent Implant System), 1 tapered implant with a wide thread (OCEAN) and 1 cylindrical implant with a narrow thread (CORAL). The insertion of one or the other design in each posterior region was determined using an online randomization service (www.randomization. com). The characteristics of the tapered implant with a wide thread were as follows: internal hex connection, wide thread pitch (1.5 mm), square-shaped thread and thread depth of 0.5 mm. The characteristics of the cylindrical implant with a narrow thread were as follows: narrow thread pitch (0.5 mm), V-shaped thread and thread depth of 0.36 mm (Figs. 1 & 2). The insertion torque of the 60 implants was registered with an Implantmed SI-1023 surgical micromotor (W&H), first establishing an initial insertion torque of 20 N cm and then increasing torque by 5 N cm increments as necessary until the required insertion torque was reached. All the implants were submerged. No healing abutments or provisionalization crowns were placed during the 4-month healing period. In all the cases, the postoperative medication prescribed was amoxicillin (500 mg) every 8 h for 7 days (in case of penicillin allergy, clindamycin [300 mg] every 8 h was prescribed) and ibuprofen (600 mg) every 8 h for 3 days.

Resonance frequency analysis
RFA was performed at baseline and 30 days after implant insertion using the Osstell Mentor (Integration Diagnostics). Each measurement was performed twice, 1 from each 90° angle, parallel to the crestal line; the highest ISQ value was taken as the reference value. 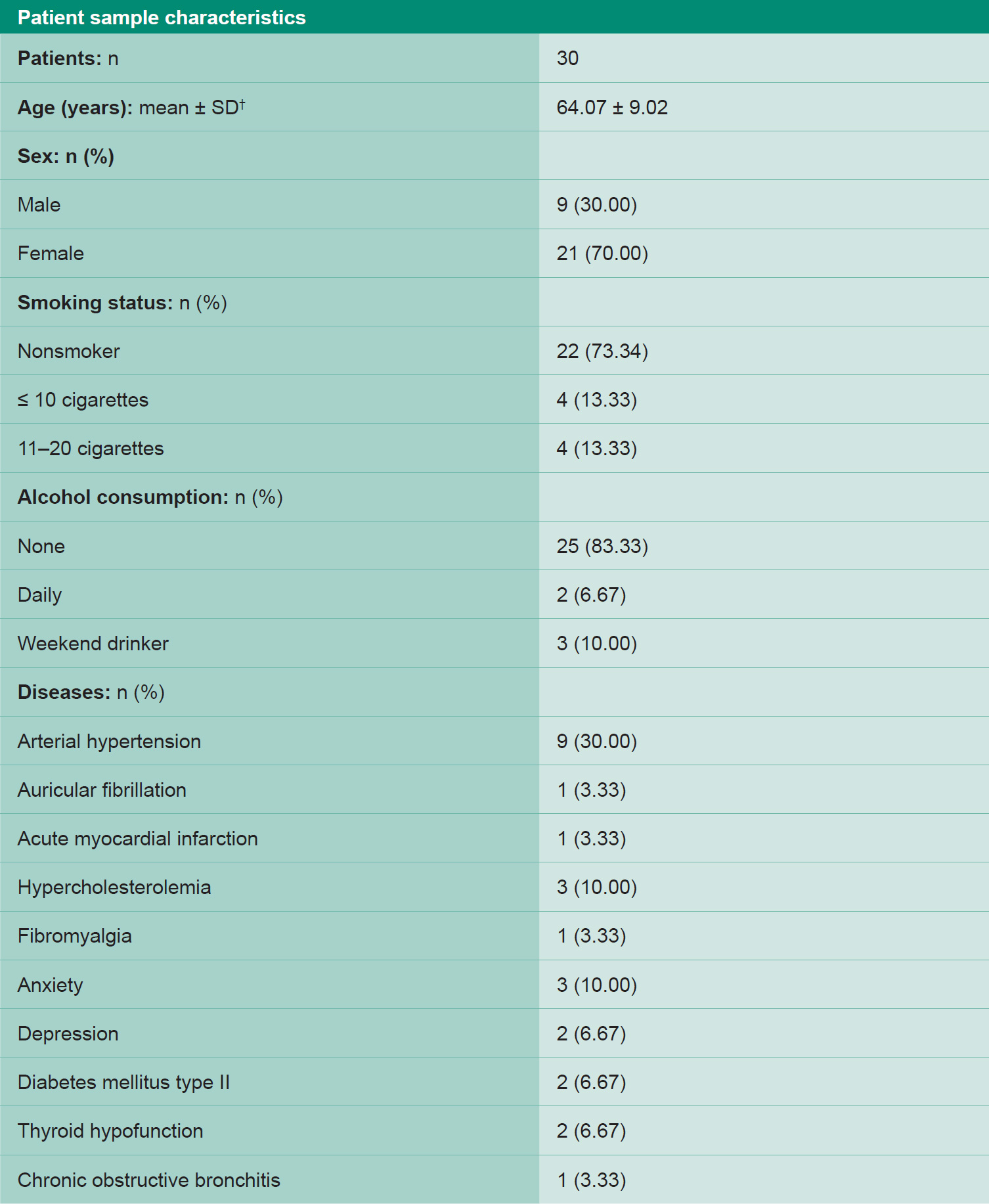 Statistical analysis
Data were analyzed using the SPSS statistical package (Version 20.0, IBM Corp.). A descriptive study of each variable was performed. The Student t test for 2 independent samples was used in application to quantitative variables, in each case determining whether variances were homogeneous. Statistical significance was established at P ≤ 0.05.

This study included 30 patients who received a total of 60 dental implants in the posterior third of the maxilla (with low type III BMD), 30 with a tapered design with a wide thread and 30 with a cylindrical design with a narrow thread. Insertion torque, ISQ and crestal bone loss were measured during the first 4 months of healing.

Thread geometry can be considered an important factor of implant stability and osseointegration. In a study by Steigenga et al., 72 implants with differing thread geometries were placed (V-shaped vs. squareshaped thread) in 12 New Zealand rabbit tibias.34Steigenga J, Al-Shammari K, Misch C, Nociti FH Jr, Wang HL. Effects of implant thread geometry on percentage of osseointegration and resistance to reverse torque in the tibia of rabbits. → J Periodontol. 2004 Sep;75(9):1233–41. After 12 weeks, the outcomes were analyzed by radiography and histomorphometric analysis, registering the bone-to-implant contact area and reverse torque. It was concluded that the square thread shape obtained better results in all the analyses performed.

Few studies have been published on the influence of implant shape on implant stability, osseointegration and survival when the implant is placed in lowdensity bone (such as the posterior third of the maxilla), as shown by the systematic review by Alshehri and Alshehri of clinical studies in humans of tapered and/or cylindrical implants in the posterior maxilla.35Alshehri M, Alshehri F. Influence of implant shape (tapered vs cylindrical) on the survival of dental implants placed in the posterior maxilla: a systematic review. → Implant Dent. 2016 Dec;25(6):855–60. For this reason, further prospective clinical trials are needed to confirm that tapered implants could be a better option for maximizing primary stability and bone healing in critical areas with low bone density.

In conclusion, although both the implant designs tested (tapered and cylindrical) may be inserted in lowdensity bone (such as the posterior third of the maxilla), tapered implants with a wide thread would appear to offer better results in terms of insertion torque, ISQ and crestal bone loss at 4 months after insertion.

Because, according to some studies, a reduced pitch improves surface contact with bone, reduces the distribution of stress and improves primary stability in low-density bone.

Because this is the first study (split-mouth prospective randomized controlled study) that evaluates the clinical behavior of two implants of different macrodesigns at the moment of insertion in low-density bone.

Because, although both implant macrodesigns can be placed in low-density bone, tapered implants with a wide thread appear to produce better results.

Further clinical investigations must be done.