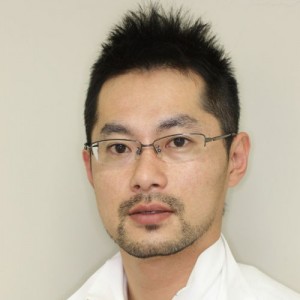 The patient’s awareness and knowledge of periodontal disease is a key factor for successful periodontal treatment. The objective of this study was to evaluate this knowledge among patients referred to a specialist periodontal clinic.

The association between periodontal status and systemic diseases, such as cardiovascular disease, respiratory disease and obesity, has also been highlighted during the last years.5Renvert S, Ohlsson O, Persson S, Lang NP, Persson GR. Analysis of periodontal risk profiles in adults with or without a history of myocardial infarction. → J Clin Periodontol. 2004 Jan;31(1):19–24.6Norderyd O, Hugoson A, Grusovin G. Risk of severe periodontal disease in a Swedish adult population: a longitudinal study. → J Clin Periodontol. 1999 Sep;26(9):608–15.7D’Aiuto F, Nibali L, Parkar M, Patel K, Suvan J, Donos N. Oxidative stress, systemic inflammation, and severe periodontitis. → J Dent Res. 2010 Nov;89(11):1241–6.8Nibali L, D’Aiuto F, Griffiths G, Patel K, Suvan J, Tonetti MS. Severe periodontitis is associated with systemic inflammation and a dysmetabolic status: a case–control study. → J Clin Periodontol. 2007 Nov;34(11):931–7. It is the duty of dentists and dental hygienists to transfer this knowledge to the patients. It has been reported that once patients are informed about the nature of their disease, the dental professionals are consequently able to obtain the patients’ compliance in establishing good periodontal health behavior.9Deinzer R, Micheelis W, Granrath N, Hoffmann T. More to learn about: periodontitis-related knowledge and its relationship with periodontal health behaviour. → J Clin Periodontol. 2009 Sep;36(9):756–64. In this matter, Horne et al. identified three important aspects: the patient’s compliance (“the extent to which the patient’s behavior matches the prescriber’s recommendations”), the adherence (the agreement between the patient and the health care provider to follow the prescriber’s recommendations) and the concordance (the agreement between a patient and a health care professional in determining whether, when and how medicines have to be taken).10Horne R, Barber N, Elliott R, Morgan M. Concordance, adherence and compliance in medicine taking: Report for the National Co-ordinating Centre for NHS Service Delivery and Organisation R & D (NCCSDO) [Internet]. London: National Coordinating Centre for Service Delivery and Organisation; 2005 Dec [cited 2016 Mar 9]. 309 p. → Available from: http://www.netscc.ac.uk/hsdr/files/project/SDO_FR_08-1412-076_V01.pdf.

Blinkhorn considers that unsatisfactory adherence can often be explained by inadequate information and when the information is irrelevant to the patient.11Blinkhorn AS. Factors affecting the compliance of patients with preventive dental regimens. → Int Dent J. 1993 Jun;43(3 Suppl 1):294–8. The patient’s awareness and knowledge of periodontal disease appears also to be a key factor for successful periodontal treatment.12Jönsson B, Öhrn K, Lindberg P, Oscarson N. Cost-effectiveness of an individually tailored oral health educational programme based on cognitive behavioural strategies in non-surgical periodontal treatment. → J Clin Periodontol. 2012 Jul;39(7):659–65.’ 13Mårtensson C, Söderfeldt B, Axtelius B, Andersson P. Knowledge of periodontitis and self-perceived oral health: a survey of periodontal specialist patients. → Swed Dent J. 2013;37(1):49–58. Deinzer et al., in a study involving 1,001 interviews in a German community, reported a deficit in knowledge about risk factors associated with periodontal disease and suggested that education on periodontal disease should be improved.14Deinzer R, Micheelis W, Granrath N, Hoffmann T. More to learn about: periodontitis-related knowledge and its relationship with periodontal health behaviour. → J Clin Periodontol. 2009 Sep;36(9):756–64. Pralhad and Thomas reported that there were some differences in the knowledge of periodontitis among different health care professionals.15Pralhad S, Thomas B. Periodontal awareness in different healthcare professionals: a questionnaire survey. → J Educ Ethics Dent. 2001 Jul;1(2):64–67.

All consecutive patients (N = 145) referred to the specialist periodontal clinic in Borås, Sweden, for a periodontal clinical examination between June and December 2014 were included. The patients were referred from private and public dental clinics in the county of Södra Älvsborg, in Sweden.

After registration of the patients’ anamneses and before undergoing clinical examination, the patients were asked whether they had been referred from a private or public clinic, whether they knew the reason why they had been referred to a specialist clinic (yes/no) and whether they knew about possible causes/risk factors associated with periodontal disease. Patients could express one or more causes and did not have to choose from a list of suggestions or a questionnaire. Their answers were then collated into the following groups: genetics/inheritance, stress, smoking, poor oral hygiene/bacteria, systemic disease (diabetes, cardiovascular disease, medicine intake). The patients were also asked whether they had obtained their knowledge on periodontal disease from dental professionals, the Internet, newspapers or other sources.

The patients were informed that their answers were being collected anonymously for research analysis. All of the patients gave their consent.

Mean value and standard deviation were used for data description. The percentage of patients with respect to the different answers was calculated and differences were analyzed by a chi-squared test, using IBM SPSS Statistics (Version 22.0; IBM, Armonk, N.Y., U.S.). A p-value of < 0.05 was considered to be significant.

Table 2
Awareness of the reason for referral to a specialist periodontal clinic. 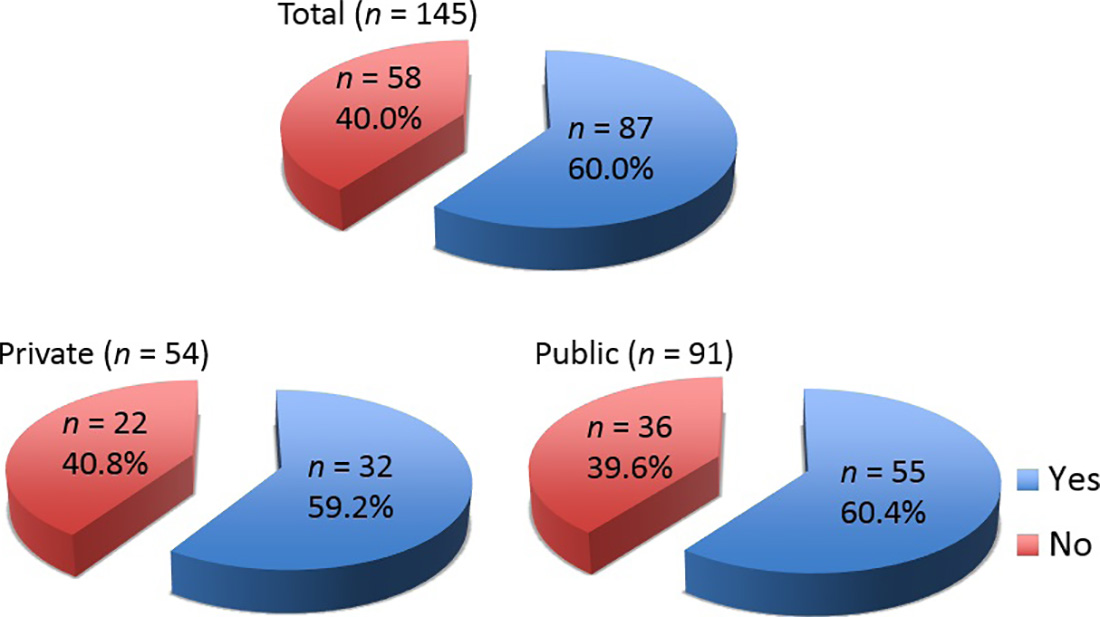 Fig. 1
Knowledge about causes of or risk factors for periodontal disease. Only about 60% of patients overall responded positively, irrespective of whether they were referred from private or public dental clinics.

Fig. 2
Answers from the 87 patients with knowledge about the causes of or risk factors for periodontal disease: The graph on the left shows that 60.9% of these patients expressed only one putative cause, while 39.1% cited two or more. The graph on the right shows that poor oral hygiene/bacteria was the most mentioned cause of periodontal disease (40.6%), followed by smoking (22.9%). Stress, genetics/inheritance and systemic disease were seldom reported (4.5%, 17.5% and 14.5%, respectively). 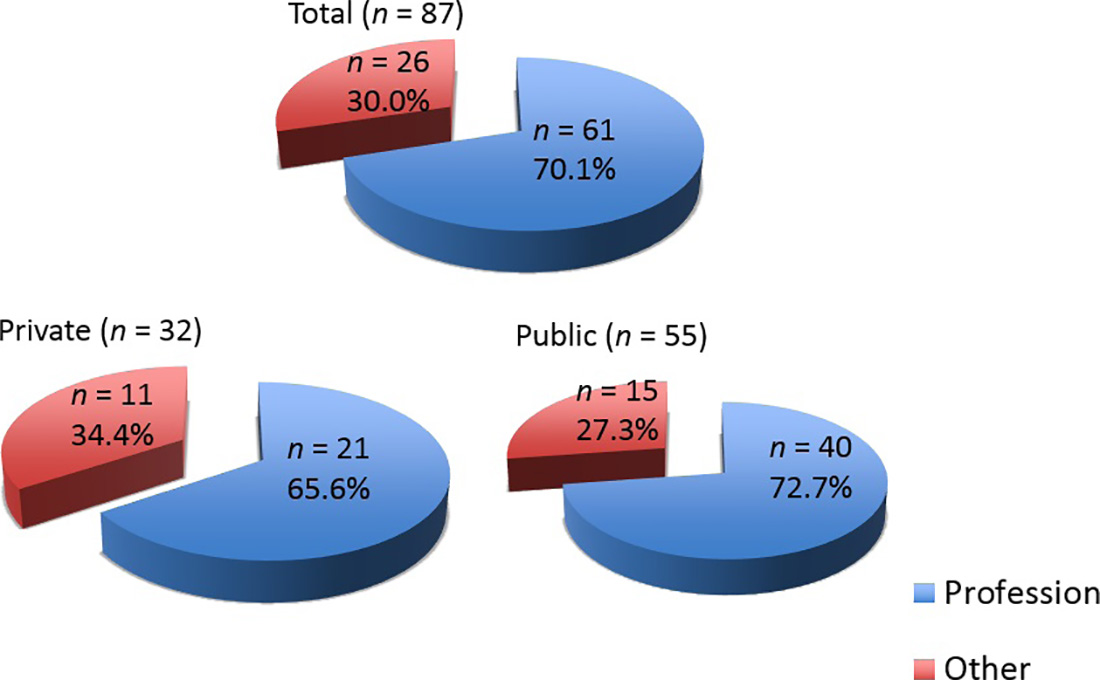 Fig. 3
The source of information among the 87 patients with knowledge about periodontal disease: The majority had obtained the information from dental professionals, but 30% of them had gained their knowledge from other sources.

The objective of the present study was to investigate the knowledge about periodontal disease among patients referred to a specialist periodontal clinic. All of the patients regularly visited public or private dental clinics for dental treatment and received periodontal nonsurgical therapy at least once a year, among other dental treatments. Among those patients, 90.3% knew the reason for their referral to a specialist clinic. When the patients were asked whether they were familiar with the causes of periodontal disease, surprisingly, 40% answered “no”, even though they had been sent to a specialist clinic and received regular nonsurgical periodontal treatment from their dentist or dental hygienist. Regardless of whether they were referred from public or private clinics, the percentage of patients with no knowledge about periodontal disease was similar. Males tended to have less knowledge than females. It has been suggested that men may have less interest in their oral health and knowledge about periodontal disease compared with women.16Furuta M, Ekuni D, Irie K, Azuma T, Tomofuji T, Ogura T, Morita M. Sex differences in gingivitis relate to interaction of oral health behaviors in young people. → J Periodontol. 2011 Apr;82(4):558–65. The high frequency of patients without any knowledge about periodontal disease among these regular recipients of dental care highlights the ineffectiveness in transferring individual tailored information from the professional dental staff to the patients, which might be due to low interest among general practitioners in the etiology and prevention of periodontal disease17Gift HC. Awareness and assessment of periodontal problems among dentists and the public. → Int Dent J. 1988 Sep;38(3):147–53. or to inadequate techniques used to achieve patients’ awareness of the disease and compliance.18Jönsson B, Öhrn K, Lindberg P, Oscarson N. Evaluation of an individually tailored oral health educational programme on periodontal health. → J Clin Periodontol. 2010 Oct;37(10):912–9.’ 19Croxson LJ. Periodontal awareness: the key to periodontal health. → Int Dent J. 1993 Apr;43(2 Suppl 1):167–77. Compliance with periodontal therapy is directly related to its success.20Mårtensson C, Söderfeldt B, Axtelius B, Andersson P. Knowledge of periodontitis and self-perceived oral health: a survey of periodontal specialist patients. → Swed Dent J. 2013;37(1):49–58. Gao et al. reviewed the effect of motivational interviewing in improving periodontal health and concluded that dental professionals should assess the presence of adequate knowledge of periodontal disease before starting treatment.21Gao X, Lo EC, Kot SC, Chan KC. Motivational interviewing in improving oral health: a systematic review of randomized controlled trials. → J Periodontol. 2014 Mar;85(3):426–37.

Thus, among the patients involved in our study, smoking seemed to be overestimated almost to the level of poor oral hygiene/bacteria. However, only a few patients cited other subject-related risk factors. Genetics/inheritance had a slightly higher percentage (17.5%) compared with systemic disease (14.5%) and stress (4.5%). Linden et al. reported that occupational stress has a relationship to the progression of periodontitis.28Linden GJ, Mullally BH, Freeman R. Stress and the progression of periodontal disease. → J Clin Periodontol. 1996 Jul;23(7):675–80. Peruzzo et al. reviewed the relationship between psychological factors and periodontal disease and concluded that there is a positive relationship between stress and periodontal disease.29Peruzzo DC, Benatti BB, Ambrosano GM, Nogueira-Filho GR, Sallum EA, Casati MZ, Nociti FH Jr. A systematic review of stress and psychological factors as possible risk factors for periodontal disease. → J Periodontol. 2007 Aug;78(8):1491–504. Studies have shown a correlation between poorly controlled diabetes and specific gene polymorphisms and periodontal disease.30Lalla E, Kaplan S, Chang SM, Roth GA, Celenti R, Hinckley K, Greenberg E, Papapanou PN. Periodontal infection profiles in type 1 diabetes. → J Clin Periodontol. 2006 Dec;33(12):855–62. Our results on the knowledge of causes of periodontal disease among patients referred to the specialist periodontal clinic are in agreement with a similar study by Razzak et al.31Razzak A, Aslam M, Malik S. Patient’s awareness about the risk of factors and the prevention of dental disease. → Pak Oral Dent J. 2012 Aug;32(2):300–3. and point to the need to improve patients’ knowledge about periodontal disease and its risk factors. In our study, the majority of the patients (70.1%) were informed by dental professionals.

The authors declare that they have no competing interests related to this study. This project was self-financed by the Department of Periodontology at Södra Älvsborg Hospital, Borås, Sweden.