The aim of this multicenter prospective study was to evaluate the survival rate of implants after insertion using low torque (< 35 N cm), by recording measurements from resonance frequency analysis (RFA), probing pocket depths and changes in interproximal crestal bone level.

This multicenter prospective clinical study was performed in partially edentulous subjects. The patients treated in the study received 1–4 SPI implants (Alpha-Bio Tec, Petah Tikva, Israel), which were loaded 4 months after implantation. Measurements of torque and RFA were recorded immediately after implant insertion. New RFA measurements were taken at the time of implant exposure surgery, prior to connection of the healing abutments. Baseline measurements of bone level were taken both directly and radiographically immediately after insertion and were compared with measurements taken during the 2-year follow-up period.

Of 88 treated subjects, 83 completed the 2-year follow-up. Of 137 implants, 5 were lost. The survival rate after 2 years of follow-up was 96.5% and the mean marginal bone loss was 0.531 mm. The mean measurement for RFA at the time of implantation was 74.92 and this increased to 76.26 prior to insertion of the prostheses.

Within the limits of the study, implants inserted with low torque (< 35 N cm), displayed high survival rates with high RFA scores and minimal bone loss at the 2-year mark after implantation.

A wide variety of techniques have been used for measuring implant stability at various clinically relevant reference points in time. The techniques currently most often used to measure stability are insertion torque, Periotest and resonance frequency analysis (RFA).11Gómez-Polo M, Ortega R, Gómez-Polo C, Martín C, Celemín A, Del Río J. Does length, diameter, or bone quality affect primary and secondary stability in self-tapping dental implants? → J Oral Maxillofac Surg. 2016 Jul;74(7):1344–53. While clinically useful, insertion torque is limited to implant insertion and thus cannot be used to determine secondary stability. Conversely, RFA is a noninvasive and widely used method to quantify implant stability at any stage during implant treatment and the follow-up period.12Manzano-Moreno FJ, Herrera-Briones FJ, Bassam T, Vallecillo-Capilla MF, Reyes-Botella C. Factors affecting dental implant stability measured using the Ostell Mentor device: a systematic review. → Implant Dent. 2015 Oct;24(5):565–77.13Meredith N. Assessment of implant stability as a prognostic determinant. → Int J Prosthodont. 1998 Sep–Oct;11(5):491–501. The RFA technique for measuring implant stability was developed by Meredith and co-workers almost 30 years ago and is commercially available as the Osstell device.14Meredith N. Assessment of implant stability as a prognostic determinant. → Int J Prosthodont. 1998 Sep–Oct;11(5):491–501. A sensor (SmartPeg) is mounted on top of the implant and the sensor is then brought to vibration by gently moving it with magnetic pulses. The sensor will vibrate for a short while and then stop. If the implant stability (stiffness of the bone–implant interface) increases, then the vibration frequency of the sensor will increase. Resistance to vibration of the transducer by the surrounding bone is registered by a small computer device and measured in hertz. Hertz are converted to ISQ (Implant Stability Quotient) values ranging from 1 to 100; the higher the ISQ, the greater the implant stability. This method is known as RFA.15Alsaadi G, Quirynen M, Michiels K, Jacobs R, van Steenberghe D. A biomechanical assessment of the relation between the oral implant stability at insertion and subjective bone quality assessment. → J Clin Periodontol. 2007 Apr;34(4):359–66.

In 2004, the SPI implant system (Alpha-Bio Tec, Petah Tikva, Israel) was introduced to the dental market. The implant has an internal hexagon connection and is available in several lengths and diameters. The implant surface is sandblasted and acid-etched (NanoTec). Its tapered core and sharp threads result in firm bone grip, which enables stable insertion and high primary stability.

The aim of this multicenter prospective study was to evaluate the survival rate of implants after insertion using low torque, by means of recording measurements from RFA, probing pocket depths and monitoring changes in the interproximal crestal bone level.

The study was conducted in accordance with the 1964 Declaration of Helsinki (and all subsequent amendments) and Good Clinical Practice (ISO 14155:2003). It was approved by the ethics committee of Sichuan University and was submitted to the other centers for approval prior to commencement of the study. The study was registered at www.clinicaltrials. gov (registration No. NCT02367261).

All subjects received 1–4 SPI implants. Using a delayed implant approach, all implants were inserted 4 months after tooth extraction. The implants were 3.3–5.0 mm in diameter and 8.0–13.0 mm in length. Implant surgeries were performed under local anesthesia and followed standard surgical techniques. After flap elevation, the implant bed was prepared using medical-grade stainless-steel drills (Alpha-Bio Tec) with progressively increasing diameter, in accordance with the drilling protocol (Table 1). The implant insertion torque was measured with a physiodispenser machine (NSK, Stevenage, U.K.; Nouvag, Goldach, Switzerland), which was placed at the level of the crestal bone. RFA was measured immediately after implant placement using an Osstell device (Osstell, Gothenburg, Sweden). A periapical radiograph was taken as a baseline, using a paralleling technique.

Implants were exposed 4 months after implantation, and RFA measurements were taken immediately prior to connection of the healing abutments. The final prostheses were fabricated 6 months post-implantation. The occlusion of the restorations was adjusted, and oral hygiene was reinforced with the patients. Patients were recalled at intervals of 12 and 24 months after implant insertion surgery in order to evaluate the periimplant bone level and the status of the prosthetic work. 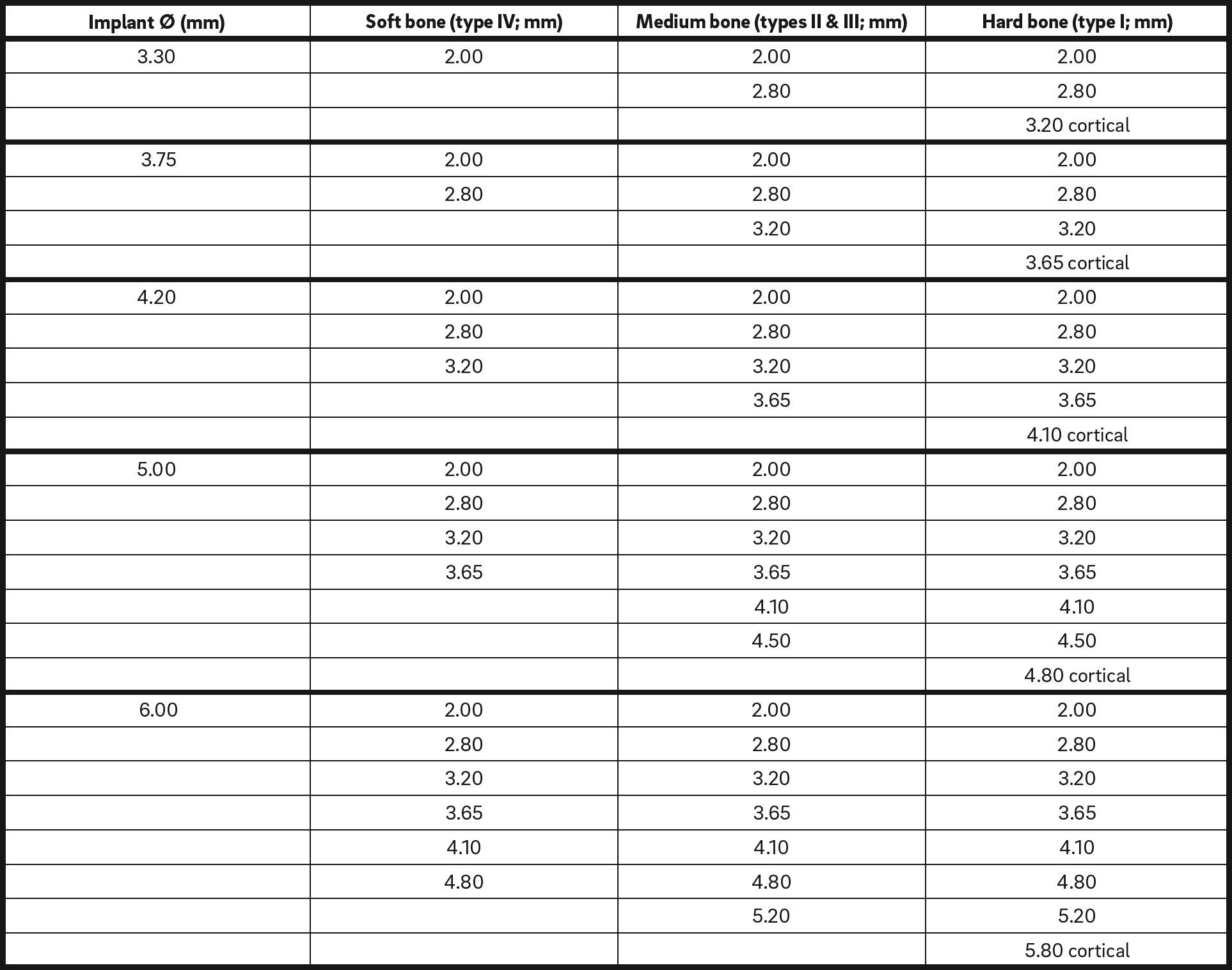 Table 1
The drilling protocol used in the study.

Survival of implants was defined as those implants that were still in place 24 months after placement and that met the criteria set by Buser et al.: the absence of persistent subjective complaints (e.g., pain, foreign-body sensation and dysesthesia), the absence of periimplant infection with suppuration, the absence of mobility, the absence of a persistent periimplant radiolucency, and the possibility of restoration.17Buser D, Weber HP, Lang NP. Tissue integration of non-submerged implants. 1-year results of a prospective study with 100 ITI hollow-cylinder and hollow-screw implants. → Clin Oral Implants Res. 1990 Dec;1(1):33–40.

Periapical radiographs with standardized settings were taken as a baseline at the time of implant surgery and were retaken at the time of abutment connection and at 12 and 24 months postsurgery (Figs. 1–3). Digital images were analyzed using ImageJ open software (Version 1.33, National Institutes of Health, Bethesda, Md, U.S.) by an independent reader who was blind to the study material. The implant length was used as a reference measurement, and bone level was therefore deﬁned as the distance from the reference point to the ﬁrst radiographic bone-to-implant contact; changes in mesial and distal bone levels in this region were considered to be remodeling. Mesial and distal measurements were recorded and the mean of these 2 values was used.

Bone level was calculated as the average of the mesial and distal levels at 3 time intervals (baseline and 12 and 24 months later). Repeated measures general linear models with Bonferroni
adjustment for multiple comparisons were used to assess the differences between the 3 time intervals. A similar analysis was performed for pocket depths in 4 locations (buccal, lingual, distal and mesial) at 3 time intervals (6, 12 and 24 months). P < 0.05 was considered statistically significant. All analyses were performed with SPSS (Version 24, IBM Corp, Armonk, N.Y., U.S.). The analysis set was as complete as possible and was as close as possible to the intention-to-treat ideal of including all subjects who had received the therapy at least once. 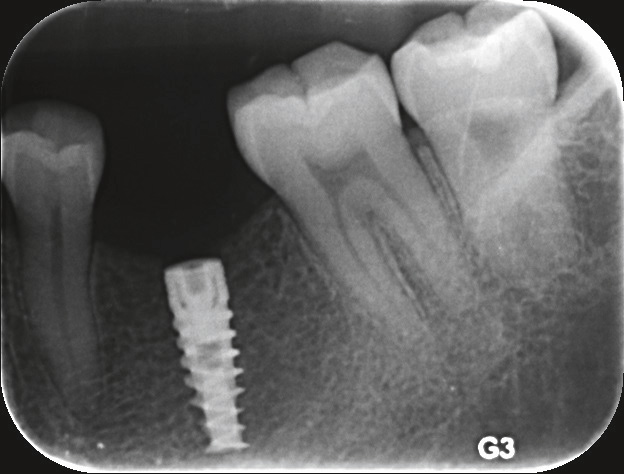 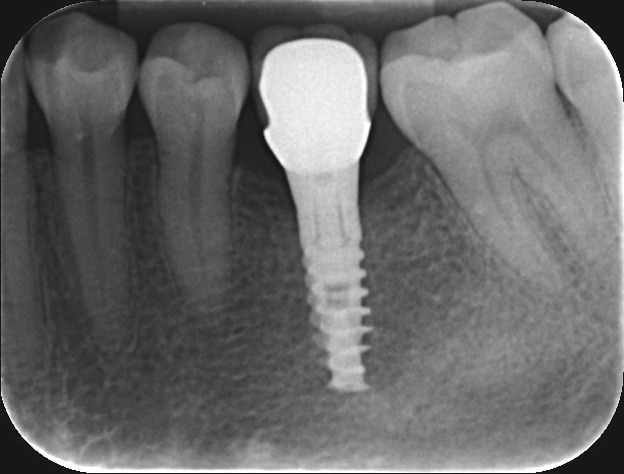 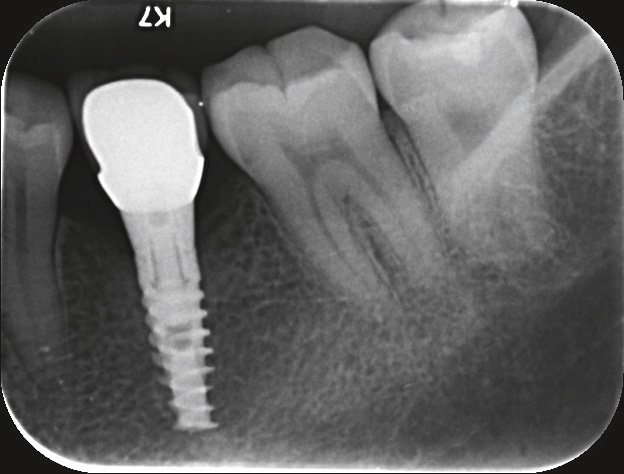 Eighty-eight patients out of 90 were included in the study. Of the 88 treated subjects, 83 participated up to the 24-month follow-up mark (2 patients had dropped out and 3 had implant failure diagnosed). The study group consisted of 47.73% men and 52.27% women and the mean age of the participants was 47.45 ± 11.15 years. The majority did not smoke at all, and 22% of the subjects smoked less than 10 cigarettes a day.

The average measurement for insertion torque was 33.250 ± 9.913 N cm (Table 2). Of 137 implants, 132 survived. The calculated survival rate of the implants after 2 years was 96.5%. Five implants were lost during the first year of the study, while no implant was lost during the second year.

RFA measurements were taken after implant placement and retaken immediately prior to connection of the prostheses (Fig. 4). The mean immediate measurement for RFA was 74.92 ± 8.93, while analysis at the time of implant exposure 4 months later yielded a 76.26 ± 7.42 mean score. 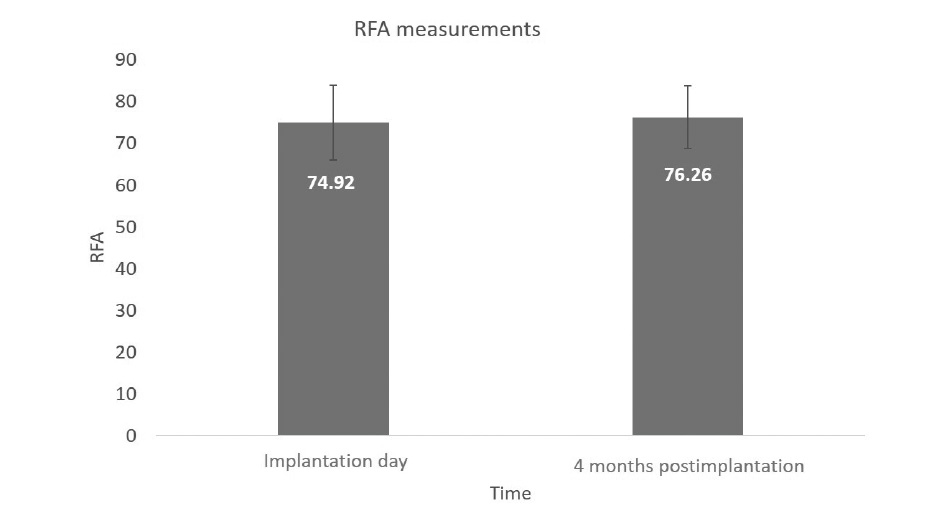 Fig. 4
RFA measurements immediately after implantation and during reopening surgery. 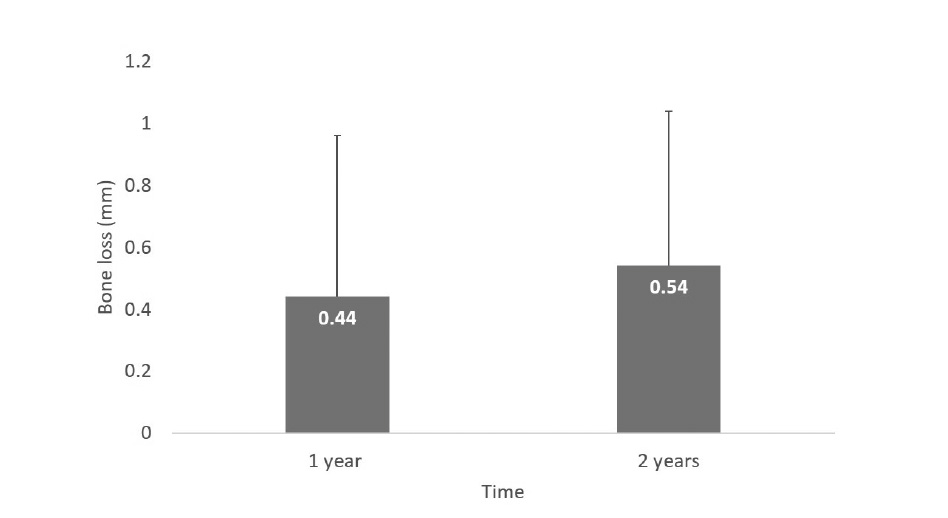 According to Chrcanovic et al., failures of dental implants can be subdivided into early and late failures, depending on whether they occur either before/at abutment connection surgery (early) or after occlusal loading of a prosthetic restoration (late).20Chrcanovic BR, Kisch J, Albrektsson T, Wennerberg A. Factors influencing early dental implant failures. → J Dent Res. 2016 Aug;95(9):995–1002. Failures in each of these 2 distinct periods may be associated with different factors. Early failure of an implant results from an inability to establish intimate bone-to-implant contact. Based on our data, the excellent stability and integration of SPI implants was evident within 4 months after implantation (before connection surgery), even though the average insertion torque did not exceed 35 N cm. 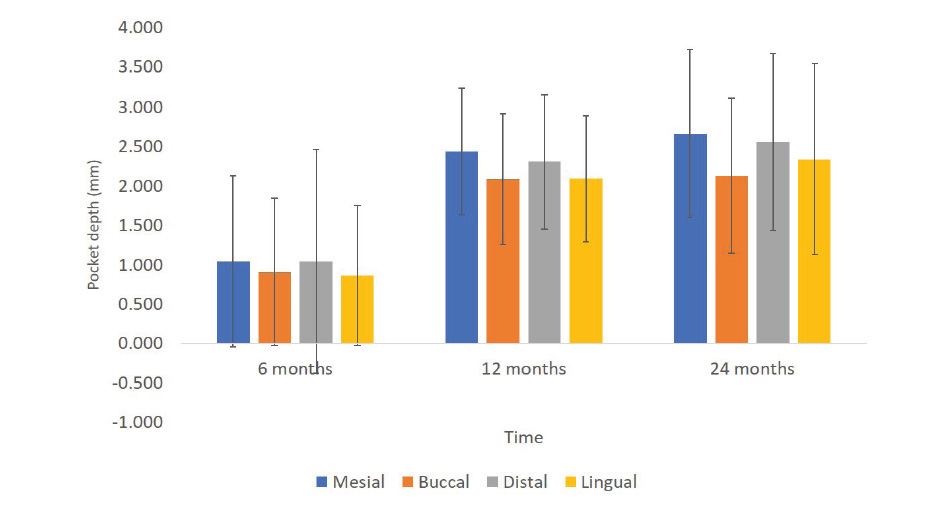 Fig. 6
Changes in pocket depth at 4 locations over time.

The mean amount of bone loss detected in the study was 0.426 mm at 1 year postimplantation and 0.531 mm at the 2-year mark. These results are in agreement with those of Artzi et al.30Artzi Z, Kohen J, Carmeli G, Karmon B, Lor A, Ormianer Z. The efficacy of full-arch immediately restored implant-supported reconstructions in extraction and healed sites: a 36-month retrospective evaluation. → Int J Oral Maxillofac Implants. 2010 Mar–Apr;25(2):329–35. and Ormianer et al.31Ormianer Z, Duda M, Block J, Matalon S. One- and two-piece implants placed in the same patients: clinical outcomes after 5 years of function. → Int J Prosthodont. 2015 Nov–Dec;29(6):608–10., which reported bone loss of 0.78 mm at the 3-year follow-up and 2.00 mm at the 9-year follow-up.

In addition, this minimal rate of bone loss was accompanied by improved RFA measurements, which may be associated with increased implant stability. The results suggest that the SPI implants allowed progressive biological integration with their bony housing.

The analysis thus revealed that probing depths increased moderately compared with the baseline over the period of the study, and one may conclude that a more fastidious oral hygiene regimen was required by all subjects, especially with regard to the implant sites, even though bone loss measurements were not found to be higher at these sites. None of the implants were diagnosed with periimplant mucositis or periimplantitis, according to the diagnostic criteria,32Roos-Jansåker AM, Lindahl C, Renvert H, Renvert S. Nine- to fourteen-year follow-up of implant treatment. Part I: implant loss and associations to various factors. → J Clin Periodontol. 2006 Apr;33(4):283–9. such as bleeding on probing.

Within the limits of the study, implants inserted with low torque displayed high RFA scores, minimal bone loss and a high survival rate at 24 months after implantation.

The authors declare that there are no competing interests. Prof. Ofer Moses serves as an external medical adviser for Alpha-Bio Tec. The study was funded by Alpha-Bio Tec.

To prove that low insertion torque may result in high resonance frequency analysis scores, which are even greater by the time of implant exposure.

This study supports the approach that resulting osseointegration does not need high implant insertion torque.

Supplementary information concerning the issue that there is no need for high implant insertion torque to allow osseointegration.