Prevalence of oral lesions among patients in the dental faculty of the University of Santiago de Compostela, Spain

The main objective of this study was to evaluate the prevalence of white, red and pigmented lesions of the oral cavity among patients attending the dental faculty of the University of Santiago de Compostela, Spain.

We designed an epidemiological, cross-sectional, descriptive and observational study. White, red and pigmented lesions were evaluated randomly in a total of 100 patients. Data such as patient’s demographics, smoking habit, presence or absence of oral lesions (and their features) and whether the patient was aware of the presence of the lesion were collected. Descriptive statistics were calculated, and contingency tables were constructed using the chi-squared test. Analytical statistics were performed by comparing means in nonparametric analyses using the Mann–Whitney U test.

The most frequent type of lesion in this study population was a red lesion, located on the lip, with a hypertrophic surface, asymptomatic and with a known causal nexus. Periodical check-ups are fundamental to be able to make an early diagnosis of any lesions, as no patient with a white lesion was aware of the risk of it being a premalignant or malignant lesion.

Studies on distribution of oral lesions allow us to estimate disease prevalence in a population and thus identify a subpopulation of high risk. For these subpopulations, we can then prepare health strategies in the different areas.4Cebeci AR, Gülşahi A, Kamburoglu K, Orhan BK, Oztaş B. Prevalence and distribution of oral mucosal lesions in an adult Turkish population. → Med Oral Patol Oral Cir Bucal. 2009 Jun 1;14(6):E272–7. In several regions of the world, studies have confirmed the wide variation in both prevalence and the most common types of lesions in the oral cavity (Table 1).

The oral mucosa can be affected by a great variety of injuries and conditions. Oral cavity lesions are considered a general health indicator. Early identification is essential for integral medical care. Therefore, soft-tissue examination must be done systematically to include the whole cavity.5Ali M, Joseph B, Sundaram D. Prevalence of oral mucosal lesions in patients of the Kuwait University Dental Center. → Saudi Dent J. 2013 Jul;25(3):111–8. Although most oral lesions are benign and do not need active treatment, some of them can involve a significant pathology. Those lesions associated with a high risk of malignant transformation are especially important. Oral cancer is a malignant tumor with an increasing prevalence. Despite technological and biological advances, its prognosis has not improved in the last decades. Early diagnosis is the most important factor for an improved survival rate. Information about risk factors of oral lesions is the first step toward investigating oral cancer prevention.6Campisi G, Margiotta V. Oral mucosal lesions and risk habits among men in an Italian study population. → J Oral Pathol Med. 2001 Jan;30(1):22–8.

Prevalence of oral mucosal lesions and their associated factors have not been previously registered in the Santiago de Compostela population. This prevalence varies significantly between geographic locations and the extrapolation of other studies’ results would not be meaningful. Accordingly, the main aim of this study was to evaluate the prevalence of white, red and pigmented lesions in the oral cavities of patients attending the dental faculty of the University of Santiago de Compostela. A secondary aim was to analyze patients’ variable features and awareness of their lesions.

An epidemiological, cross-sectional, descriptive and observational study was designed to determine prevalence of white, red and pigmented lesions among patients attending the dental faculty of the University of Santiago de Compostela. The study was conducted over a period of 8 months between September 2016 and April 2017. All of the procedures were carried out with the proper understanding and written consent of the patients in accordance with the Declaration of Helsinki. 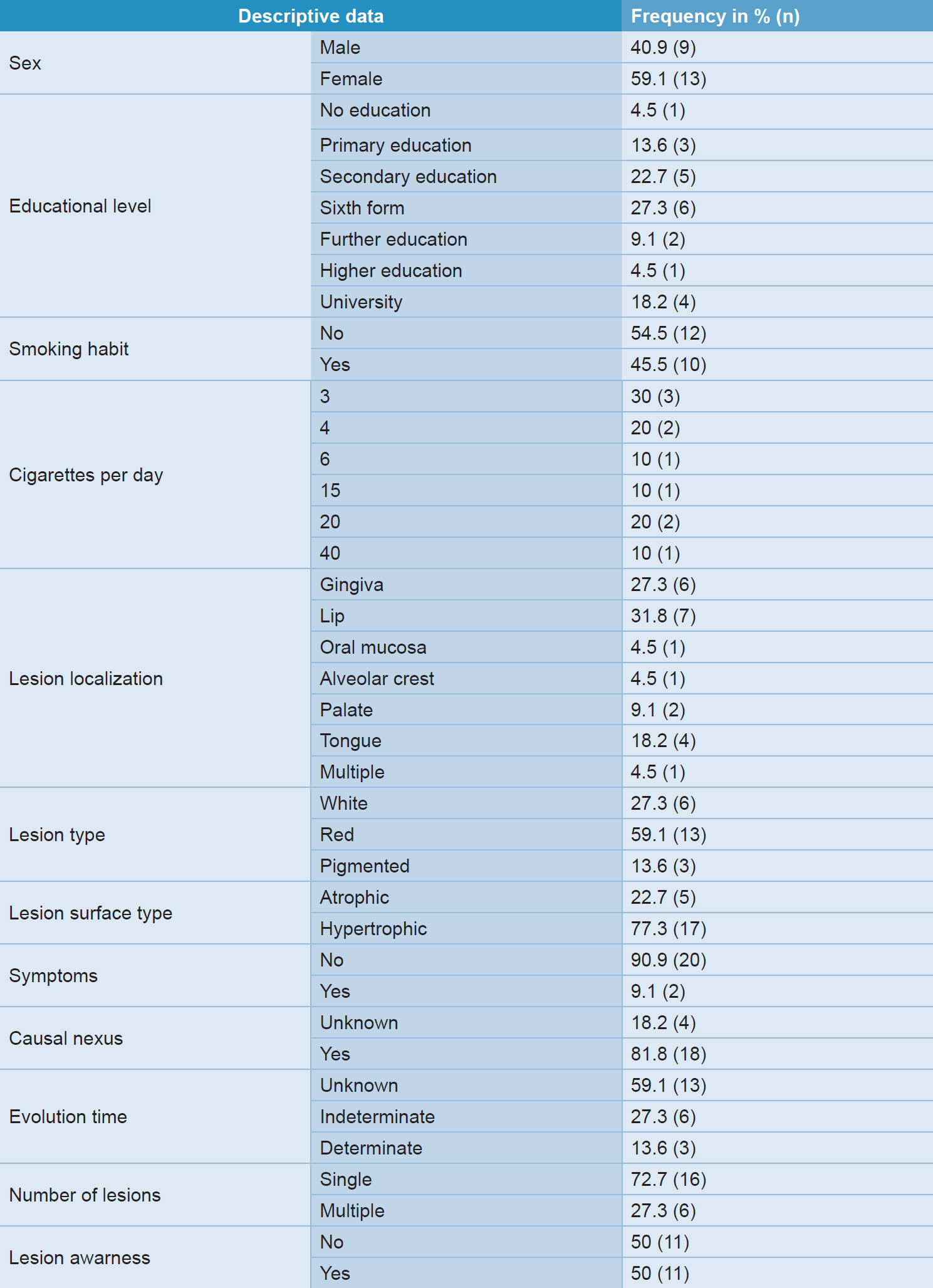 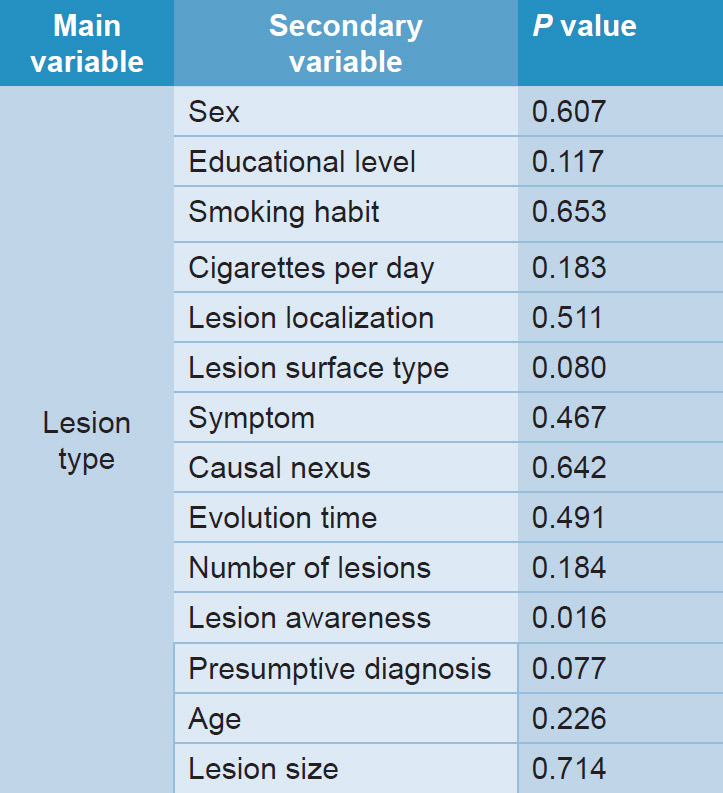 Data extraction
Two specific operators performed data collection and extraction, after previous calibration for correct evaluation of the variables. In cases of discrepancy, a third operator corroborated the results. The agreement in this process was calculated using Cohen’s kappa coefficient, and a κ score of 0.8 was obtained.22McHugh ML. Interrater reliability: the kappa statistic. → Biochem Med (Zagreb). 2012;22(3):276–82. Patient exploration was carried out using an exploration kit consisting of a mirror, an exploration probe and a CP12 periodontal probe.

Clinical parameters
Clinical parameters noted from patients were as follows:
• demographic data (age, sex and educational level);
• smoking habit (yes/no and cigarettes per day);
• presence of oral lesions (yes/no);
• lesion features (type, localization, size, presence of symptoms, single/multiple, atrophic/hypertrophic surface, causal nexus [if the patient or the operator found any causal factor], evolution time and presumptive diagnosis);
• whether the patient was aware of the presence of the lesion (if the patient thought that he or she may have a lesion this was considered to demonstrate awareness).

We classified the type of lesion (white/red/pigmented) and surface (atrophic/hypertrophic) according to the most prevalent aspect or the more serious aspect in terms of clinical prognosis in cases of mixed lesions.

Sample size
To estimate the sample size, the greater proportion of patients affected by oral lesions was taken into account according to the literature, that is, 35%. To obtain a statistic potential of 80%, we needed a total of 86 patients. Finally, we analyzed a randomized sample of 100 patients.

Statistical analysis
All data were coded and analyzed using IBM SPSS Statistics software (Version 20). Descriptive statistics were calculated using frequencies and percentages for the categorical variables and means and standard deviations for the quantitative variables. Contingency tables were constructed using the chi-squared test. Analytical statistics were performed by comparing means in nonparametric analyses, using the Mann– Whitney U test and 1-way analysis of variance. All of the differences in which the P value was ≤ 0.05 were considered statistically significant.

A total of 100 patients were examined. Table 2 summarizes descriptive data of the patients with oral lesions. The patients’ mean age was 54.68 years (SD = 14.64). Most patients with oral lesions were women (almost 60%). The mean lesion size was 1.83 cm (SD = 41.79). In the bivariate analysis, in which the main variable was the type of lesion, white, red or pigmented (Table 3), we observed that the patient was aware of the lesion when the lesion was red (69.2%) or pigmented (66.7%), but not when it was white (0%). Regarding the influence of sex on the type of lesion, we observed that more than 60% of pigmented lesions occurred in males, while red and white lesions were predominant in women.

Our results revealed a prevalence of 22% of oral lesions in patients attending the dental faculty. Previous studies show that prevalence varies significantly in general populations (range: 9.7–61.6%; Table 1). The majority of the lesions were red (59.1%), followed by white (27.3%) and pigmented ones (13.6%).

According to our study, red lesions are more frequent in older people than white or pigmented ones. A study carried out in an elderly Chilean population agrees with our finding of a higher frequency of red lesions at older ages.23Rivera C, Droguett D, Arenas-Marquez MJ. Oral mucosal lesions in a Chilean elderly population: a retrospective study with a systematic review from thirteen countries. → J Clin Exp Dent. 2017 Feb 1;9(2):e276–e283. doi: 10.4317/jced.53427. In the total number of patients diagnosed with any type of lesion, white, red or pigmented, there was a greater number of women (59.1%). In other studies, a higher prevalence of lesions in women had already been reported.24Kovac-Kovacic M, Skaleric U. The prevalence of oral mucosal lesions in a population in Ljubljana, Slovenia. → J Oral Pathol Med. 2000 Aug;29(7):331–5. Other studies have reported a higher prevalence of lesions in males.25Bhatnagar P, Rai S, Bhatnagar G, Kaur M, Goel S, Prabhat M. Prevalence study of oral mucosal lesions, mucosal variants, and treatment required for patients reporting to a dental school in North India: in accordance with WHO guidelines. → J Family Community Med. 2013 Jan;20(1):41–8.26Jahanbani J, Sandvik L, Lyberg T, Ahlfors E. Evaluation of oral mucosal lesions in 598 referred Iranian patients. → Open Dent J. 2009 Mar 27;3:42–7. However, there are studies that support no significant difference in prevalence between women and men.27Ali M, Joseph B, Sundaram D. Prevalence of oral mucosal lesions in patients of the Kuwait University Dental Center. → Saudi Dent J. 2013 Jul;25(3):111–8.

In our study, 63.6% of patients with lesions had only sixth form and secondary education. We would think that patients with a higher educational level would have a greater concern for oral health and therefore come to the consultation with a suspicion of a lesion. In other studies, a higher prevalence of oral diseases was reported in patients of lower socioeconomic status, which may be the result of a lower educational level.28Sehgal VN, Syed NH, Aggarwal A, Sehgal S. Oral mucosal lesions: miscellaneous—Part III. → Skinmed. 2016 Jun 01;14(3):193–201.

A slightly higher percentage of patients who participated in this study were nonsmokers. We could attribute this to the growing antismoking campaign of recent decades, increasing gradual awareness of the dangers of this habit. In a study conducted in 2001 in Italy, 88% of the sample were already aware of the damage caused by smoking.29Campisi G, Margiotta V. Oral mucosal lesions and risk habits among men in an Italian study population. → J Oral Pathol Med. 2001 Jan;30(1):22–8. In another study conducted in Kuwait in 2013, smoking participants reported that they would consider quitting if an improvement of oral health could be demonstrated as a result.30Ali M, Joseph B, Sundaram D. Prevalence of oral mucosal lesions in patients of the Kuwait University Dental Center. → Saudi Dent J. 2013 Jul;25(3):111–8.

The location of the most frequent lesions in the present study was the lip (31.8%). We suggest that this is related to the lips being the first barrier to the oral cavity. Because of this, they are constantly exposed to various irritants, which play an important role in the etiology of lesions in this location.35Arslan S, Cobanoglu B, Ural A, Saygin I, Isik AU. A 15-year retrospective study of 160 cases of benign lip lesions. → J Laryngol Otol. 2015 Dec;129(12):1224–7. Most of the lesions had a hypertrophic surface, almost 80%, which could be related to the higher prevalence of traumatic injuries. Only 9.1% of patients reported symptoms. This result was similar to that of other studies.36Robledo-Sierra J, Mattsson U, Svedensten T, Jontell M. The morbidity of oral mucosal lesions in an adult Swedish population. → Med Oral Patol Oral Cir Bucal. 2013 Sep 1;18(5):e766–72.

The prevalence of lesions in the oral cavity found in this study was 22%. Most lesions appeared in women. The most frequent type of lesion in this study population was red; in terms of location, the lip was the most prevalent site. Hypertrophic and asymptomatic lesions were more frequent. In more than 80% of the patients, we could identify a known causal nexus. No patient with a white lesion was aware of it. Periodical checkups are fundamental to be able to make an early diagnosis of any lesions, as no patient with a white lesion was aware of the risk of it being a premalignant or malignant lesion.

The authors declare that there are no conflicts of interest in connection with this article, including there being no funding sources.