Unlikely case of submasseteric abscess originating from a maxillary molar: The skipping lesion 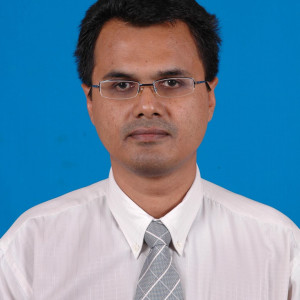 We report a case of submasseteric abscess originating from a maxillary tooth, complicated by underlying diabetes mellitus and a multidrugresistant organism.

A 61-year-old male patient with uncontrolled diabetes mellitus presented with swelling on the left cheek of 2 weeks in duration with rapid progression to trismus, dysphagia and rupture of swelling with pus discharge. Culture and sensitivity testing revealed the presence of multidrug-resistant Klebsiella pneumoniae. Based on the patient’s history and clinical presentation, a diagnosis of submasseteric abscess originating from the maxillary molar was made. Antibiotic administration, control of systemic disease and wound dressing were done as treatment.

The patient made a full recovery, with scarring on the ruptured region.

Submasseteric abscess is a rare complication that commonly has dental origins, particularly the mandibular third molars.1Jones KC, Silver J, Millar WS, Mandel L. Chronic submasseteric abscess: anatomic, radiologic, and pathologic features. → AJNR Am J Neuroradiol. 2003 Jun–Jul;24(6):1159–63. However, the development of a submasseteric abscess from maxillary molars is scarcer. We could find only 1 case report in our literature search.2Gallagher J, Marley J. Infratemporal and submasseteric infection following extraction of a non-infected maxillary third molar. → Br Dent J. 2003 Mar;194(6):307–9. Owing to the rarity and late symptomatic manifestation of such cases, diagnosis may not be easy for the general practitioner. Management of submasseteric abscess can be further complicated in patients with impaired immune systems or infected with multidrug-resistant organisms. In this article, we would like to highlight the case of a patient who presented with a rare submasseteric abscess from an unlikely origin, complicated by uncontrolled diabetes and a multidrug- resistant organism.

A 61-year-old male patient with underlying diabetes mellitus presented to the Dental Department with the chief complaint of swelling on the left cheek with a duration of 2 weeks. The patient claimed that the swelling had begun at the left angle of the jaw and had been increasing in size. The swelling was accompanied by severe throbbing pain and difficulty in swallowing. Upon further probing, the patient said that he had undergone a difficult and unsuccessful extraction of the maxillary left second molar 2 weeks prior.

Upon physical examination, there was a large, diffuse swelling on the left face involving the left masseter region and extending to the left submandibular region with the loss of palpable mandibular angle (Fig. 1). The swelling was firm, tender, warm and erythematous. The patient was also experiencing trismus, with mouth opening of 20 mm interincisally. Intraoral examination revealed poor oral hygiene and a retained root of the maxillary left second molar, which was tender to percussion. The gingiva surrounding the retained root of the maxillary left second molar was assessed to be sufficiently healed, without any signs of infection. The teeth and the gingiva on the opposing arch were healthy. An immediate diagnosis of submasseteric cellulitis with possible involvement of the lateral pharyngeal space was made. The patient was immediately warded and given intravenous crystalline penicillin 4 mega units statim, followed by 2 mega units every 6 h. The patient was also referred to the medical department for management of underlying diabetes mellitus. The patient was prescribed a 500 mg metformin oral tablet once daily. Aspiration was done with a size 16 syringe needle, but yielded no product. It was regrettable that a CT scan was not available at that time.

On day 5 after admission, there was a breakdown of the overlying skin with pus discharge at the left posterior submandibular region, extending to the submasseteric region. The margin of the wound was friable and necrotic. However, the patient claimed that the pain had subsided with the absence of dysphagia. Wound debridement was done, and it was irrigated with chlorhexidine and normal saline. A rubber tube was placed to allow further drainage (Fig. 2). Topical metronidazole was placed on the wound and covered with gauze. A swab was taken and sent for culture and sensitivity testing. The result was penicillin-resistant Klebsiella pneumoniae with sensitivity to cefuroxime. Hence, cefuroxime was chosen as a replacement for penicillin. Daily wound dressing was done, together with the placement of topical metronidazole.

On day 13, the swelling over the left submandibular and submasseteric region had subsided. The patient did not have any dysphagia or trismus. There was no more pus discharge from the wound or from the rubber drain, and only a raw wound was exposed (Fig. 3). After the rubber drain had been removed, a wound dressing was done and the wound was left to heal by secondary intention. A full-mouth scaling and removal of the retained root of the maxillary left second molar were done. The patient was then discharged with a weekly appointment for review and wound dressing.

The patient was followed over a 2-month period. At the last follow-up, the patient presented with scarring of the area posterior to the left angle of the mandible that was slightly darker than the surrounding skin, but with minimal contracture (Fig. 4).

In 1948, Bransby-Zachary described a potential space that constitutes a masticator space known as the submasseteric space.3Bransby-Zachary GM. The submasseteric space. → Br Dent J. 1948;84:10–3. He mentioned that the common cause of submasseteric space infection was pericoronitis of the third molar.4Bransby-Zachary GM. The submasseteric space. → Br Dent J. 1948;84:10–3. The submasseteric space is a potential space formed between the lateral wall of the mandible and the medial aspect of the masseter muscle and its investing fascia. Submasseteric abscess is often not the foremost diagnosis when a patient complains of swelling of the jaw owing to its rarity.5Jones KC, Silver J, Millar WS, Mandel L. Chronic submasseteric abscess: anatomic, radiologic, and pathologic features. → AJNR Am J Neuroradiol. 2003 Jun–Jul;24(6):1159–63. A study has shown that the most commonly involved orofacial space is the submandibular space, followed by the buccal space and lastly the submasseteric space.6Rao DD, Desai A, Kulkarni RD, Gopalkrishnan K, Rao CB. Comparison of maxillofacial space infection in diabetic and nondiabetic patients. → Oral Surg Oral Med Oral Pathol Oral Radiol Endod. 2010 Oct;110(4):e7–12. It is often thought to be trismus, as its first sign is spasm of the masseteric muscle, resulting from the irritation of the muscle fiber by the infection. Extraoral examination cannot determine its severity, as the swelling is often firm and mild in the early stages, owing to its being confined by the masseteric muscle. The swelling is isolated, involving the angle of the mandible, and tender and diffuse in nature. Once the infection penetrates the muscle fibers, the swelling becomes fluctuant and erythematous.7Hupp JR, Ellis E, Tucker MR. Contemporary oral and maxillofacial surgery. 5th ed. → St. Louis, MO: Mosby; 2008. 728 p. 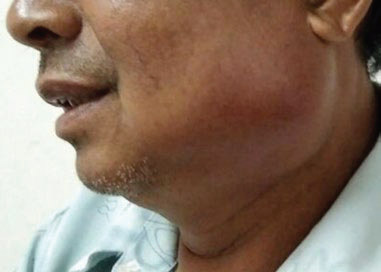 Fig. 1
Swelling of the left of the face involving the left masseter region. 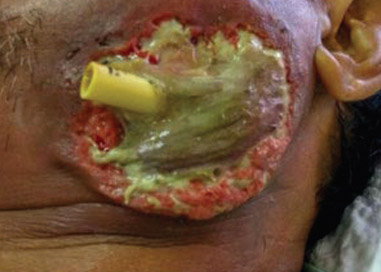 Fig. 2
A rubber drain was placed for pus drainage.

We were only able to find 1 other similar case, which was reported by Gallagher and Marley, for which they hypothesized that an infected hematoma was formed at the infratemporal region before extending into the submasseteric space.8Gallagher J, Marley J. Infratemporal and submasseteric infection following extraction of a non-infected maxillary third molar. → Br Dent J. 2003 Mar;194(6):307–9.

K. pneumoniae is frequently isolated as a major infective organism in diabetic patients. Empirical antibiotic therapy of amoxicillin with clavulanic acid together with metronidazole, coupled with surgical drainage, should provide a satisfactory outcome.9Rao DD, Desai A, Kulkarni RD, Gopalkrishnan K, Rao CB. Comparison of maxillofacial space infection in diabetic and nondiabetic patients. → Oral Surg Oral Med Oral Pathol Oral Radiol Endod. 2010 Oct;110(4):e7–12. However, in this patient, owing to the presence of penicillin- resistant K. pneumoniae, the patient’s condition did not respond to the administration of penicillin and rapidly deteriorated. By the time we had obtained the microbiology results, the abscess had ruptured through the overlying skin. After changes were made in the antibiotic administration, there was a significant improvement of the wound. We noticed a significant reduction in pus discharge from the wound and an increase in healthy granulation tissue formation. It is regrettable that, owing to the rapid progression of the infection, we could not prevent the breaking down of superficial tissue, leading to permanent scarring. 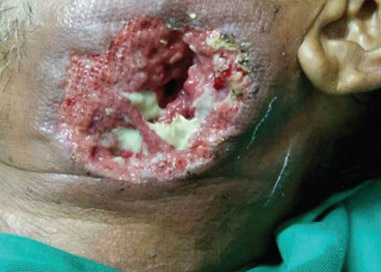 Fig. 3
Healing of the perforated wound. 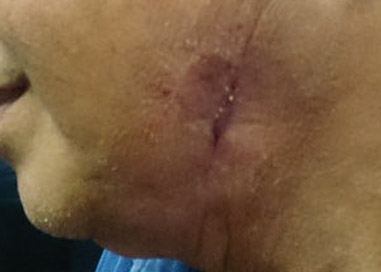 Fig. 4
Scarring at the area posterior to the left angle of the mandible.

The management of this patient would have been greatly improved if a CT scan had been available. The diagnosis of submasseteric abscess would have been made much earlier. With CT imaging as a guide, a proper incision and drainage would have been done to provide an outlet for the abscess, preventing a breakdown of the overlying tissue.

This case highlights what seems to be an impossible diagnosis. While the submasseteric space is not a neighboring space of maxillary teeth, the possibility of the spread of infection exists. At present, no paper addresses the risk level of such a complication of the extraction of maxillary teeth. Severe systemic disease or a multidrug-resistant organism could be the culprit of such a seemingly impossible diagnosis. It is hoped that, from this paper, practitioners will be made aware of such complications and prompted to investigate further to manage such a case in a timely manner.

We would like to thank the Director General of Health Malaysia for his permission to publish this article.

We wrote this paper to report a case of submasseteric abscess that originated from the maxilla, which is almost unheard of. Furthermore, we wished to highlight the difficulty in managing this patient, who had severe systemic disease and a multidrug-resistant infection, as well as the complications I faced.

Through our literature review, I found that there is currently only 1 other reported case of submasseteric abscess originating from the maxillary molars. Others may find our paper helpful in collecting more information and evidence.

Treating this patient was fairly limited owing to limited facilities in our hospital. We feel practitioners should be able to diagnose an emergency case clinically and provide appropriate treatment before a diagnostic investigation can be done.

We feel there is a need to conduct a study on the relation between abscess of uncommon origin and severe systemic disease or multidrug-resistant organisms.